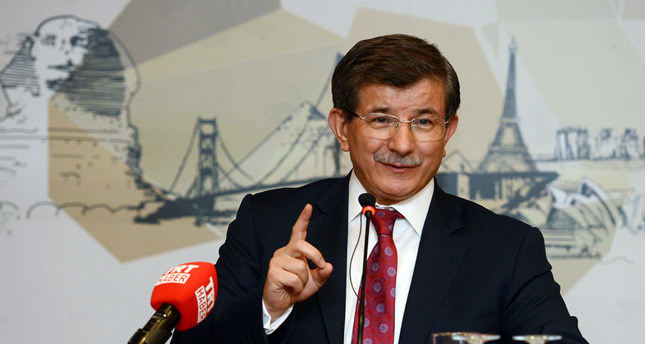 by AA May 03, 2014 12:00 am
LONDON —Turkish Foreign Minister Ahmet Davutoğlu has appealed for efforts to "reconstruct a better future for Turkish-Armenian relations" in his article published on British daily The Guardian on Friday.

The Turkish foreign minister touted Erdoğan's unprecedented message as a "courageous step," urging both Turks and Armenians to "follow Erdoğan's lead and bury our common pain."

"It is an undeniable fact that the Armenians suffered greatly in the same period. The consequences of the relocation of the large part of the Armenian community are unacceptable and inhuman," Davutoğlu said.

"What is also true is that the dispute over why and how the Armenian tragedy happened, sadly, continues to distress Turks and Armenians today," he said.

"Communal and national memories of a pain, suffering, deprivation and monumental loss of life continue to keep the Armenian and Turkish peoples apart. Competing and seemingly irreconcilable narratives on the 1915 events prevent the healing of this trauma. What we share is a "common pain" inherited from our grandparents.

Ahead of the anniversary of the incidents of 1915, which led to an unknown number of people dying in civil strife after the Ottoman Empire approved a deportation law for Armenians on April 24 of that year, Turkish Prime Minister Recep Erdoğan said last week, "Regardless of their ethnic or religious origins, we pay tribute, with compassion and respect, to all Ottoman citizens who lost their lives in the incidents of 1915."

The message was welcomed by Armenian intellectuals and the Armenian Patriarchate in Turkey as a positive step, while some said it fell short of dealing with the issue.