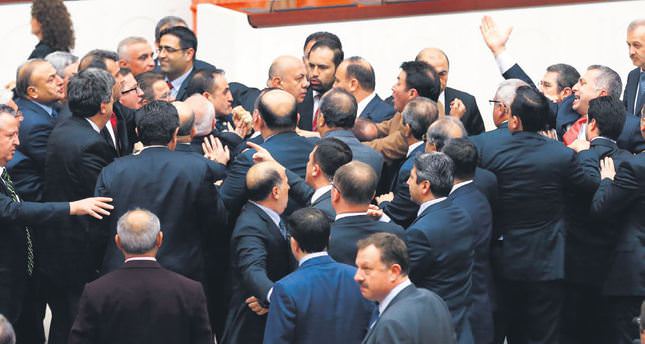 The Turkish Parliament approved a commission of inquiry to look into the case of four former ministers accused of corruption. Daily Sabah spoke to AK Party deputies about the allegations

ANKARA — The Turkısh Grand National Assembly (TBMM) on Monday approved the establishment of a commission of inquiry into four former ministers accused of corruption during the Dec. 17 operation. The government, determined to get to the bottom of corruption allegations, submitted its own application for the formation of the parliamentary commision to investigate the actions of four former ministers and prepare a report on whether anything criminal had taken place.

Former Economy Minister Zafer Çağlayan, Interior Minister Muammer Güler and Minister of Environment and Urban Planning Erdoğan Bayraktar resigned from their posts, and EU Minister and Chief Negotiator Egemen Bağış was discharged in a cabinet reshuffle over the accusation of corruption after the Dec. 17 operation which was carried out by members of the Gülen Movement who infiltrated the police and judiciary with the aim of overthrowing the government in late 2013. Each of the former ministers defended themselves for 10 minutes in the TBMM and deputies voted on the motion via secret ballot.

Taking to the rostrum for the first time since the Dec. 17 operation, Çağlayan addressed the general assembly in his defense. He defended himself by saying that during his ministry and deputy period, he was at the service of businessmen who will contribute to Turkey's growth and he will continue to be of service for the sake of the country. Accused of taking a bribe by accepting a watch valued at about $700,000 from renowned businessman Reza Zarrab who was arrested and then released as part of the Dec. 17 operation, Çağlayan rejected the allegations and said, "I paid for it [the watch], Reza Zarrab had an office close to the store and his employees took the watch from the store and delivered it to me."

Describing the Dec. 17 operation as a "coup plot" and an "alleged corruption operation," Bağış defended himself by saying, "After serving the country for 12 years as a deputy, being slandered by those allegations is sad. These [allegations] are just a planned game of the parallel state. They are all lies and slanders." He went on to add, "The reality will emerge sooner or later. We will never shy away from being held to account."

In his defense speech, Güler said, "These [allegations] are just a stage for a scenario that was prepared before. Universal presumption of innocence is violated without controlling the legitimacy of documents." Refuting the claims, Güler said, "This investigation includes many illegal practices and abuse of power from the very beginning to the operation phase." While the other former ministers gave their defense speeches, Bayraktar preferred not to speak at the general assembly about the allegations against him.

Following the speeches, 469 lawmakers cast their votes on a secret ballot at the TBMM with 453 voting in favor of the inquiry commission, nine voting against it, six abstaining and one empty ballot. According to the votes, a committee consisting of 15 lawmakers will investigate the allegations against the former ministers and issue a report at the end of a two-month investigation.

If the investigation process is not enough, the committee will have two additional months for a detailed inquiry. The Turkish Parliamentary Speaker's Office will ask for 45 deputies from the political parties who did not comment on the accusations to establish the parliamentary investigation commission.

The commission will hear all sides and decide whether to judge the ministers in the Supreme State Council. The commission will have the authority to request documents and information from governmental or private institutions regarding the issue, to use all mediums of ministerial cabinet, to hear witnesses and experts and to ask for help from judicial authorities.

Dominated by high tension, the general assembly first discussed the AK Party's motion to establish a commission. A total of 24 deputies spoke about five different motions regarding the former ministers accused of corruption. AK Party Deputy Süreyya Sadi Bilgiç, the Peoples' Democracy Party (HDP) Deputy Hasip Kaplan, the main opposition Republican People's Party (CHP) Vice President Engin Altay and the Nationalist Movement Party (MHP) Adana Deputy Seyfettin Yılmaz all spoke about the motion. Bilgiç stated in his speech that if the ministers were involved in corruption they should pay the price to the nation. Bilgiç described the Dec. 17 operation as an "assassination plot through the law."

CHP Vice President Akif Hamzaçebi stated that no one should see the votes garnered in the elections as a vote of confidence for corruption. "Nobody should think that those allegations can be covered by the voting rates. They will pay the price in the Supreme State Council," he said In his speech, MHP Vice President Oktay Vural denounced the AK Party for being insincere in its motion to establish an inquiry commission and for disguising the allegations.

Vural reiterated that those ministers would be held accountable in the Supreme State Council. AK Party Vice President Nurettin Canikli stated that thousands of citizens were following the general assembly and it was impossible to hide the speeches from the nation. He pointed out that very few political parties in Turkey's history had submitted a motion for establishing an inquiry commission to look into allegations regarding their own ministers. "The truth should be revealed. No one can cover these allegations. What is needed to be done in the legal framework will be done," said Canikli, highlighting that the ministers will pay the price if there is indeed any corruption.

Daily Sabah spoke to AK Party Istanbul Deputy Bülent Turan regarding the inquiry commission to be established and the Dec. 17 operation. Turan echoed the government sentiments that the AK Party has been fighting against the corruption since the day it was established, contrasted with the opposition parties that raised their voices only in relation to the Dec. 17 operation. "Our stance against the corruption is as firm as the first day that the AK Party was established," he said. "That's why we will hold accountable whoever is involved in corruption. Fighting against corruption is the main principle of AK Party."

Turan stated the AK Party considers the Dec. 17 operation as an attempted coup against the government and a smear campaign to manipulate popular will. Noting that the inquiry commission was proposed by the AK Party, Turan said the commission will work in secret and most of the commission members will be composed of lawmakers.

Political analyst Mustafa Şen said even though the opposition said the AK Party tried to disguise the corruption allegations, the AK Party had no such intention. "The AK Party will probably look into and clarify those allegations but it will not let those allegations turn into a perception management operation against the party," said Şen.
Last Update: May 07, 2014 2:30 am
RELATED TOPICS