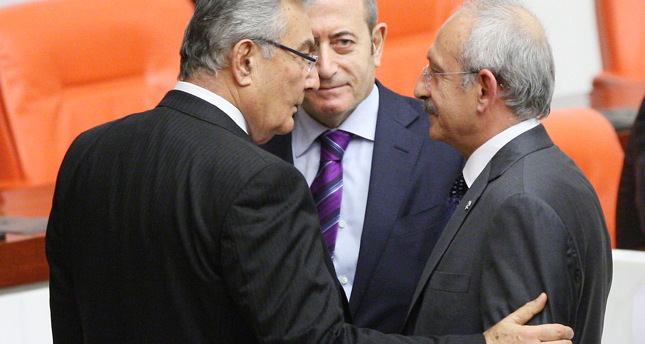 Turkey's main opposition party, the CHP has not agreed on which presidential candidate to support due to internal divisions. Prompting CHP Chairman Baykal to suggest that all opposition parties name joint candidate

ANKARA — Candidates for Turkey's presidential election have yet to be officially named but Prime Minister Recep Tayyip Erdogan is widely expected to be nominated by the AK Party in the coming days. However, Turkey's opposition parties are continuing to mull over possible candidates for the presidential run.

Republican People's Party (CHP) leader Kemal Kılıçdaroglu and former leader Deniz Baykal, who was forced to quit as party leader in 2010, met in Ankara to discuss the party's road map in the upcoming presidential election. After the meeting Baykal spoke with journalists and said that they will continue their efforts to find a joint candidate. "The presidential election is serious business…and the opposition should agree on a joint candidate," Baykal said. Even though the latest signals from opposition parties indicate that they will unable to nominate a joint candidate, Baykal did not rule out that possibility and added that efforts to find a joint candidate should continue.

"If each political party has its own candidate, the AK Party would benefit from it," Baykal remarked. Some are suggesting that, Işıl Karakaş, a Turkish judge working at the European Court of Human Rights (ECHR), has been pegged as a possible presidential candidate but party officials have not contacted her yet. Kılıçdaroğlu recently stated that the CHP's chosen candidate will be nonpartisan and able to embrace all citizens from different political backgrounds while also having respect for the rule of law. Kılıçdaroğlu also hinted several times that they might nominate a female candidate for president.

Sources also said that in the meeting Baykal asked Kılıçdaroğlu to have major revision in the party's Central Executive Board (MYK) and in provincial organizations, which seem responsible for losing the election.

Nationalist Action Party (MHP) leader Devlet Bahçeli recently stated that his party will select their own candidate for the presidential election. "During the presidential election all political parties will have to campaign and nominate a candidate. As the MHP we will nominate a candidate who is a valuable member of our party to protect our unitary structure, territorial integrity and our national state. We will be in this race," he said. Some political analysts see the MHP whip former Interior Minister Meral Akşener as a potential candidate.

Akşener would likely gain votes not only from the MHP voter base but also from the AK Party's center-right and the CHP's nationalist voter base. However, sources in the MHP have remarked that MHP Leader Bahçeli will not allow Akşener to run for president. "Meral Akşener can gain votes from the AK Party and CHP's nationalist voter base. Even though she doesn't stand a chance against Erdoğan, it is highly probable that she will garner more votes than the MHP were able to get in the recent election and it may lead to an intra-party leadership race," a political advisor from MHP headquarters remarked.

Co-chairwoman of the People's Democracy Party (HDP) Sebahat Tuncel recently said the HDP has a tendency to nominate its own presidential candidate.

Moreover, HDP whip Pervin Buldan said in a recent statement that HDP is yet to decide whether to support the AK Party candidate in the second round of the presidential election. "I believe, the steps the government will take related to ongoing peace process will be decisive for Kurdish voters," she added.

While opposition parties stumble, Erdoğan is seen as a popular candidate by AK Party members despite the fact that he has not yet officially announced his intention to run. Moreover, a recent survey suggests that Erdoğan may get elected in the first round of the election and avoid a runoff in the event he chooses to run. According to a survey conducted by ORC Research Company in 30 provinces, 52 percent of participants indicated that they would vote for Erdoğan in presidential elections.

A recent decision by the ruling AK Party's executive board also hints that Erdoğan will throw his hat into the ring.

In a meeting over the weekend, the AK Party Central Decision and Executive Board (MKYK) decided to maintain the party's three-term rule that allows AK Party politicians to run for Parliament for three consecutive terms. The decision has ended speculation that Erdoğan will stay on as prime minister for a fourth term. Another message given by the meeting was that the AK Party is preparing for the 2015 parliamentary elections by reorganizing the party. Most MKYK members stated that they support Erdoğan's presidential bid. Erdoğan will gather with AK Party deputies at a retreat in Afyon on May 9 to discuss the presidential election. Following that gathering, the AK Party central executive committee will convene, after which the AK Party will announce which candidate it will back.