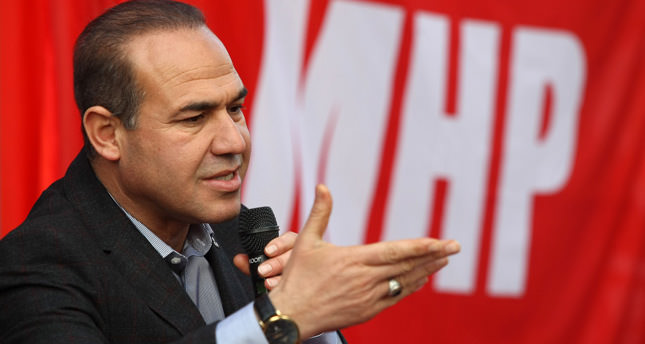 by Daily Sabah May 08, 2014 12:00 am
ISTANBUL — As Turkey prepares for the presidential election, which will elect a president by popular vote for the first time in the country's history, the Supreme Election Board (YSK) announced that candidates' registration will begin on June 29. Speaking to Hürriyet newspaper regarding the most suitable candidate for the opposition, far-right Nationalist Movement Party (MHP) leader Devlet Bahçeli suggested that opposition parties should unite to find a joint candidate in the presidential elections on Aug. 10 to prevent the ruling AK Party's candidate from garnering the majority vote, using a set of triangles to explain his presidential election strategy.

While Prime Minister Recep Tayyip Erdoğan is expected to be the Justice and Development Party's (AK Party) candidate for the presidency after Deputy Prime Minister Bülent Arınç's remarks last week to indicate the likeliness of this, the question is whether opposition parties will unite behind a joint candidate or nominate their own candidates.

Speaking to Hürriyet newspaper regarding the most suitable candidate for the opposition, Nationalist Movement Party (MHP) leader Devlet Bahçeli suggested that opposition parties should unite on a joint candidate in the presidential elections on Aug. 10 to prevent the AK Party's candidate from garnering the majority vote. MHP leader stated that he would ask for support from other parties, nongovernmental organizations and religious sects in the country. He said, "Turkey is going through a delicate process, that's why I suggest this [nominating a joint candidacy] for one time only."

Bahçeli depicted a geometric formulation to show a candidate that would garner all ideologies' votes. Drawing three triangles to formulate the presidency race, Bahçeli wrote 64 percent under one triangle and wrote 36 percent under the other triangle to show voting trends in Turkey; then, he drew a bigger triangle as a third one and stated that a joint candidate should garner votes of the Turkish citizens that fit into the two triangles. Bahçeli explained his formulation by saying, "We [the opposition] should nominate a candidate belonging to the biggest triangle. If we nominate someone that is acceptable to voters belonging to the 64 percent and the 36 percent triangles, most of those voters will vote for this joint candidate."

He defined a joint candidate that will be accepted by Turkish voters as an individual being nationalist, conservative and having moral values. He added that a joint candidate should be democratic and secular. Bahçeli said: "We [MHP] do not want polarization, that's why we do not approve of a president that will cause polarization. If we nominate a candidate with these characteristics, the AK Party will lose against us even if it nominates [Prime Minister] Recep Tayyip Erdoğan."

Harshly criticizing commentators on TV programs for making it seem as though Prime Minister Erdoğan had already been elected president, the MHP leader said, "TV commentators make a selection between [President] Gül and Erdoğan.
No one says why Erdoğan should not be the president."

Bahçeli noted that he would ask for support from the main opposition Republican People's Party (CHP), the far-right Felicity Party (SP), the far-right Great Union Party (BBP) and nongovernmental organizations, religious groups, including Alevis. Bahçeli continued: "The candidate that we [MHP] nominate will be one who can run the country, rather than being MHP's representative." He added that if other parties nominate a candidate being more inclusive, the MHP could also support that candidate just to stop polarization in the country.