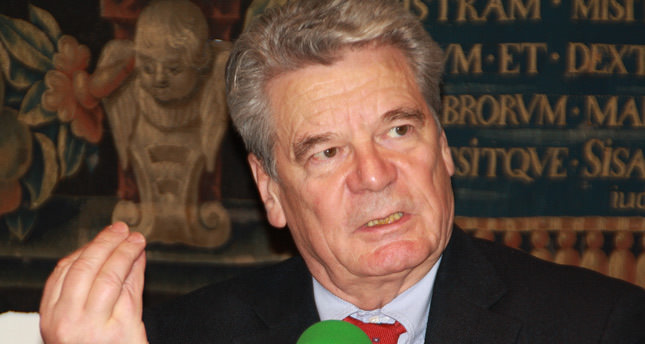 ISTANBUL — German President Joachim Gauck's controversial visit to Turkey last week is still making headlines as key governmental figures in Turkey have reacted to the diplomat's critical statements about Turkey's policies on social media, journalism and the recently passed legislation in the country.

The latest developments have seen a delegation led by Stephen Weil, the prime minister of Lower Saxony in Germany, not granted an official visit with Prime Minister Recep Tayyip Erdoğan while they were in the country. This move has been interpreted as a diplomatic reaction by Erdoğan to Gauck's controversial remarks in his speech at Middle East Technical University (ODTÜ).

Those comments, which were very critical of the government in Ankara, greatly differed from those at his meeting with Turkish governmental figures, including Erdoğan and President Abdullah Gül.

Turkish Foreign Minister Ahmet Davutoğlu yesterday arrived in Austria to attend a conference organized by the Union of European Turkish Democrats (UETD). During his speech at the conference, Davutoğlu harshly criticized the German president. "If the German president says that he is concerned about Turkey's future, we [Turkey] have the right to say what we want concerning Germany's future, due to neo-
Nazi groups. Turkey is a hospitable country, our president [Gül] and prime minister [Erdoğan] welcomed him [German president], but we will not let anyone play with Turkey's pride," said the foreign minister.

Davutoğlu also touched on the issues of racism and Islamophobia in Germany and added that racism and Islamophobia across Europe should be matters of concern, particularly cases of Turkish families' houses being set ablaze and hate speeches written on mosques.
Noting that he visited families of nine Turkish citizens who were murdered by the far-right German terrorist group, the National Socialist Underground (NSU), Davutoğlu expressed his concern when he learned that German police named family members of victims as opposed to members of racist gangs.

In response to Turkish officials' comments following Gauck's visit, the parliamentary speaker of Lower Saxony Bernd Busemann met with the head of the Turkish National Grand Assembly (TBMM) Commission of Human Rights and AK Party Sakarya Deputy Ayhan Sefer Üstün two days ago in Ankara. During a press conference, Üstün highlighted the deep-rooted bilateral relations between Turkey and Germany by saying, "Even though there are ups and downs, we [Turkey-Germany] are two countries that should have close and positive relations."

Üstün said that bilateral ties with provincial prime ministers, parliamentary speakers and deputies play an important role in finding a solution to the issues between countries."

Highlighting the traditional relations between the two countries, Busemann expressed the importance of strong bilateral ties and cooperation in terms of education, culture and science. "Of course, there can be issues between friendly and allied countries, but we [Turkey-Germany] should talk about and solve those problems," said Busemann.

A closed-door meeting was held after Üstün and Busemann met with reporters.

According to the information obtained by Daily Sabah, the TBMM Commission of Human Rights presented a file, including violations of human rights in Germany, and made a presentation on the issue to Busemann and other members of the German delegation.

Numerous attempts were made to contact Üstün but Daily Sabah could not reach him by phone due to his busy schedule.

Last week, Erdoğan harshly criticized the German president's remarks by saying that Gauck's stance is not appropriate for a foreign politician. As Gauck praised Turkey on the humanitarian aid efforts provided to Syrian refugees in the country and its handling thereof in a positive atmosphere during the official meeting, Gauck later criticized the National Intelligence Organization (MİT) Law, Gezi Park incidents and a number of other topics during his speech at ODTÜ. "We are going through a period when access to the Internet and social media networks are restricted, journalists with critical views are being dismissed and even tried, and a period when newspapers face publication bans and media organs are under legal pressure," said Gauck in his speech to an audience of students and academics at ODTÜ's Culture and Conference Center. Gauck claimed the current government was trying to interfere in the judiciary and security forces in an effort to "sway public opinion," posing an imminent threat to judicial independence. Gauck said in a televised interview on Turkish news channel a Haber that he was misguided and stated certain nongovernmental organizations had persuaded him to make those comments.