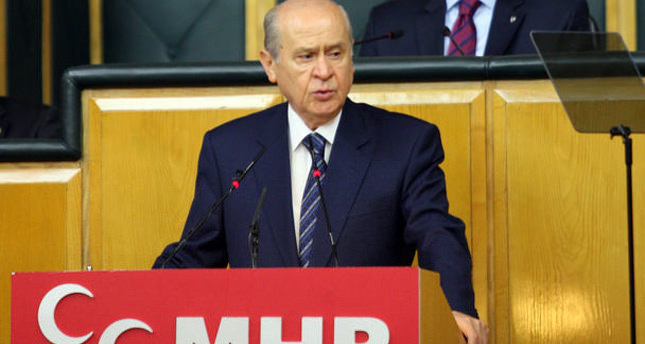 by AA May 08, 2014 12:00 am
ANKARA — Members of Turkey's opposition Nationalist Movement Party (MHP) have announced their party is working on selecting its nomination for the country's presidential election.

The move comes three months before Turks go to the polls on 10 August to choose their first popularly-elected president.

Speaking at a group meeting of his party on Wednesday, MHP leader Devlet Bahceli said: "We are striving to determine the most proper, plausible and right candidate for the presidency."

Bahceli said the party would present its candidate to the public as soon as the nomination process was completed.

Turkey's presidential hopefuls can submit their applications to the supreme electoral body from 29 June until 3 July.

The constitution was amended in 2007 for the president to be elected by the public, but the president's powers - as a part of the executive body of the state - have yet to be amended.

A candidate who achieves 51 percent of votes in the first round will be directly elected.

If no candidate receives the required percentage in the first round, a run-off will be held on August 24.