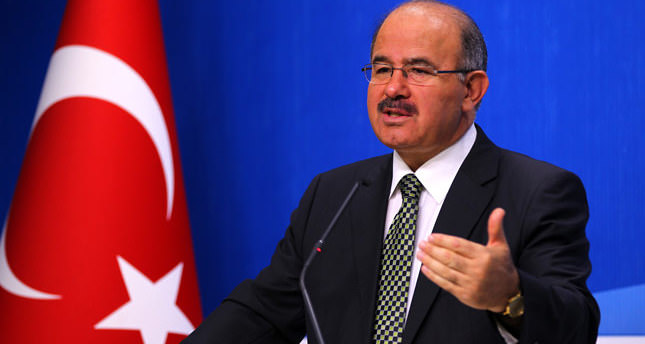 by Daily Sabah May 09, 2014 12:00 am
ISTANBUL — Hüseyin Çelik, the vice president and spokesperson of the Justice and Development Party (AK Party), in a recent press statement criticized the Nationalist Movement Party (MHP) for its controversial alliance with the Republican People's Party (CHP) and touched upon the CHP's inconsistent stance in terms of what they claim to stand for and their actions.

Pointing to the fact that Turkey's current agenda focuses on the upcoming presidential elections, Çelik noted some political parties such as the MHP and CHP are making calls to establish alliances. Referring to MHP leader Devlet Bahçeli's suggestion that a triangular model for choosing the next president should be employed, Çelik criticized the idea and called on Bahçeli to avoid making calculations, as he previously failed in his calculations and was mocked as a result. Additionally, Çelik panned the CHP and MHP's alliance and called them "soul mates" and sarcastically responded to Bahçeli's call for Recep Tayyip Erdoğan to resign from the AK Party if he is elected president, which he claimed was unreasonable and absurd. In response to claims about the AK Party cooperating with the pro-Kurdish Peace and Democracy Party (BDP), Çelik stated such a thing never entered their minds and was not true. "We will cooperate and make alliances with the people," said Çelik, who went on to note that those voting for the CHP, MHP and BDP would vote for Erdoğan for president and underlined the fact that the conservative base of the MHP was not satisfied with the current situation because they had no other choice, but the AK Party would present an alternative.

On the other hand, Çelik took an opposing stance towards the CHP for provoking people during the construction of the road in Middle East Technical University (ODTÜ) in Ankara and stated even though the CHP's supporters opposed its construction, they are the ones who currently use it the most, as it is a shortcut to the CHP's headquarters in Ankara. "If the road led to the AK Party's headquarters instead of the CHP's, they would claim that the road was specifically made for the AK Party," said Çelik, who went on to note they now take advantage of it even though they protested its construction. "This was tested during the Gezi protests," said Çelik, who claimed these people were claiming to stand up for the environment but were only using it as a means to exploit people's goodwill and gain more supporters rather than a genuine concern for the environment.

Explaining the AK Party's efforts to deal with the issue of protecting the environment, Çelik stated the prime minister has personally inspected seashores throughout the country with Erdoğan Bayraktar, the former Minister of Environment and Urban Planning, and has ordered the removal of structures visually polluting the view and the repair of damage done by previous regimes.