CHP's administration to be restructured ahead of presidential election 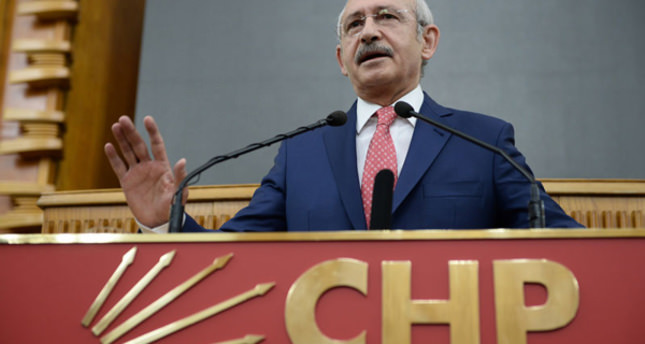 by Daily Sabah May 09, 2014 12:00 am
ANKARA — Following the failure of main opposition Republican People's Party (CHP) in the March 30 elections, which shook the party's members and administration, CHP leader Kemal Kılıçdaroğlu on Wednesday announced in a meeting that the CHP's Central Administration Board (MYK) will be restructured prior to the Aug. 10 presidential election, the first-ever election to elect a president by a popular vote.

A new administration board is expected to be announced today. The MYK is composed of 18 members, including 16 CHP vice presidents. According to journalist Murat Çelik in the Vatan daily, at least eight and at most 10 MYK members will be removed from their posts.

According to reports, Kılıçdaroğlu wants to include women and young members in the MYK's structure. The CHP administration also approves the necessity of restructuring after members' two-year terms in office. Çelik stated that there is wide acceptance both in public opinion and within the party that restructuring the MYK is one of the adverse outcomes of the last March 30 local elections.

Meanwhile, in regards to the CHP's presidential candidate, Kılıçdaroğlu said in a televised interview that the CHP needs time to announce its candidate, but Kılıçdaroğlu will not be a candidate in the presidential race. When asked if Turkish Constitutional Court President Haşim Kılıç, Turkish Bar Association head Metin Feyzioğlu, former CHP leader Deniz Baykal, Turkish Industry and Businessmen's Association (TÜSİAD) Board of Directors chair and businesswoman Ümit Boyner or Court of Cassation Honorary President Sami Selçuk could be the CHP's candidate for the presidency, Kılıçdaroğlu replied that one of them may be a candidate.

Kılıçdaroğlu further stated that the CHP would submit an application next week requesting the formation of a parliamentary inquiry into allegations of corruption against Prime Minister Recep Tayyip Erdoğan after the Dec. 17 operation, which was carried out by Gülen Movement infiltrating police and judiciary with an aim to tarnish the government's image.

Referring to Erdoğan, CHP leader said: "If a prime minister says that he is innocent, he needs to be cleared [of allegations]. He needs to be held accountable." At a press conference in Parliament, CHP Deputy Chief Akif Hamzaçebi said that they expected public prosecutors to take action on the corruption claims concerning the Dec. 17 operation. "There is pressure on the prosecutors that has been created by the government; that's why it is impossible for the prosecutors to submit a summary of proceedings to Parliament concerning Prime Minister Erdoğan," said Hamzaçebi.

The deputy chief further confirmed that the allegations of corruption that they will submit "have not been confirmed or refuted by Erdoğan." Former Economy Minister Zafer Çağlayan, Interior Minister Muammer Güler and Minister of Environment and Urban Planning Erdoğan Bayraktar resigned from their posts, and EU Minister and Chief Negotiator Egemen Bağış was discharged in a cabinet reshuffle over accusations of corruption after the Dec. 17 operation in late 2013. Each of the former ministers on Monday defended themselves for 10 minutes in Parliament and deputies voted on the motion via secret ballot. Setting up an inquiry commission to look into the four former ministers accused of corruption was approved after the secret voting. The CHP now wants Justice and Development Party (AK Party) deputies to show consistency and vote in favor of setting up a committee to investigate Erdoğan.