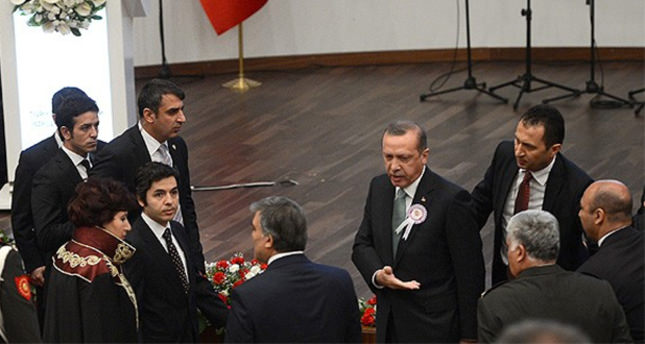 Many statesmen, including President Abdullah Gül and Chief of General Staff Gen. Necdet Özel were all present at the ceremony marking the 146th anniversary of the foundation of the Council of State.

Drawing attention to Feyzioğlu's long speech, Erdoğan said "[Council of State] President speaks for only 25 minutes; you have been speaking for more than an hour. You are misbehaving, this is enough."

Commenting on Feyzioğlu's criticisms towards government's "insufficient efforts" for the victims of the Van earthquake -- which claimed the lives of hundreds of people and injured more than 2,500 in 2011 -- PM Erdoğan said "Your comments on Van are pure lies."

Feyzioğlu is known to be among the possible candidates of the main opposition Republican People's Party (CHP) for the upcoming presidential elections.