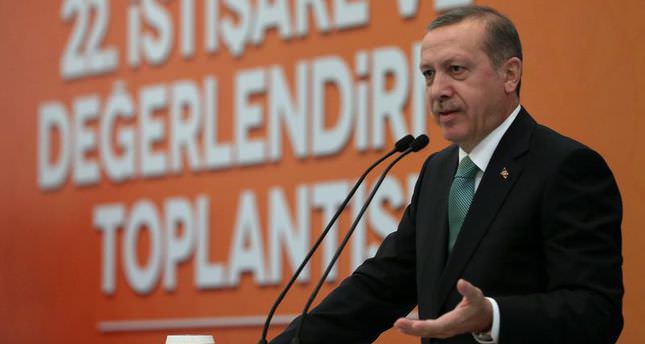 by AA May 11, 2014 12:00 am
ANKARA — Turkey's Prime Minister Recep Tayyip Erdoğan has said media freedom in Turkey has been misrepresented by western organizations due to the propaganda influences by media outlets supporting Turkish opposition parties.

Erdoğan's remarks are in reference to a recent report by U.S.-based Freedom House, which categorized Turkish media as 'not free.'

"Some western organizations are influenced by the negative propaganda of the media supporting the opposition Republican People's Party (CHP) and criticize press freedom in Turkey," Erdoğan said Saturday, as he delivered a speech at his ruling AK Party's Evaluation and Consultation Conference in the western city of Afyonkarahisar.

"Turkey is not a banana republic; there are more national television channels in Turkey than in European countries and they enjoy full freedom. Those organizations should look at themselves and show if they have courage to criticize their prime ministers, presidents, monarchs and dictators," he said.

In response to criticism over the banning of YouTube and Twitter, with the former ban still in effect, Erdoğan said: "Twitter, Youtube and Facebook are obliged to obey laws in the United States, Europe, Russia and India. Have you ever heard any objections the likes of which we hear in our country?"

Erdoğan drew a parallel between the 1960 military coup in Turkey and recent political turmoil due to corruption allegations and wiretap leaks. He said certain media organizations, columnists, journalists, associations, capitalist circles and especially a segment of the judiciary took part in dirty games to prepare ground and conditions suitable for a coup ahead of May 27, 1960.

"All kinds of actions based on violence, vandalism, lawlessness, lies and slander were orchestrated against the Democrat Party just as they have been done against us."

Erdoğan also criticized the main opposition Republican People's Party, saying, "(The party) is trying to create an atmosphere of mistrust in the country as it had done ahead of all of the coups including those of May 27, 1960 and September 12, 1980."

He said the Republican People's Party has always been the only enemy of freedoms in Turkey and played a leading role in the execution of all coups in the country.

Turkey witnessed major military coups on May 27, 1960 and September 12, 1980 as well as several coup attempts. Former Prime Minister Adnan Menderes was executed along with his Foreign Minister Fatin Rustu Zorlu and Finance Minister Hasan Polatkan following the May 27, 1960 military coup.