US stands with Turkey against the Assad regime, says Ricciardone 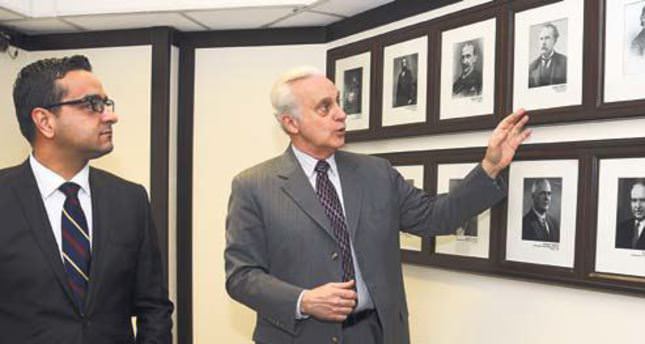 In an exclusive interview with Daily Sabah, Francis Ricciardone stressed the alliance between Turkey and the U.S. will ensure regional stability

Daily Sabah interviewed the U.S. Ambassador to Turkey, Francis J. Ricciardone. The ambassador stressed the decades-long alliance between Turkey and the United States and underlined that the alliance is crucial to ensure regional stability. He also touched on the fact that the two countries respect one other's independent policies while maintaining national interests. He confirmed that he enjoyed his time spent in Turkey and may collect his memoirs into a book.

The Obama administration's policy of non-direct military intervention in Syria has been widely criticized. What do you think about this policy?

Francis Ricciardone: I'll be glad to respond to all your questions, but first let me congratulate Daily Sabah for your new venture in the increasingly competitive business of publishing a daily newspaper - especially as a foreign language paper.

Since you publish in English, you will reach a global readership, including Americans, who are keenly interested in Turkey's everunfolding story as a modern Republic in a troubled region. I wish you success in serving both your global readership and your country in presenting Turkey's story to the world. Hayirli olsun!

As to your first question regarding U.S. policy on Syria, not only is our policy correct but it is also similar to that of Turkey and other friends of Syria. We all absolutely reject the intolerable, unspeakable cruelty and oppression inflicted on the Syrian people both by the foreign-backed Assad regime and by the extremist groups who effectively work in the interests of the regime. But we don't see external military intervention as the solution to Syria's civil war. Indeed, foreign military support to the regime's killing machine is only creating more deaths, more refugees, more suffering for the Syrian people. There are simply no easy or immediate solutions that can be imposed from outside. So we are working with Turkey and many others on several levels.

With regard to humanitarian relief efforts, we commend Turkey's exemplary generosity and compassion in caring for over 200,000 displaced Syrians in camps widely recognized as setting the highest world standards and for hosting many times that number of Syrians in communities throughout Turkey. For our part, the United States thus far has contributed some $2 billion to international humanitarian relief efforts for Syrians, making us by far the world's largest direct financial donor.

We support relief not only for refugees who have fled Syria but also for those suffering inside, so that fewer Syrians will feel driven to seek refuge in other countries.

Through diplomatic efforts at the United Nations and beyond, we are working with Turkey and other allies to press for a political solution to the conflict, to increase global humanitarian relief efforts, to discourage arms transfers to the regime, and to remove one internationally outlawed category of particularly terrible weapons from the Assad regime's arsenal, that is chemical weapons.

Again with Turkey and other friends of the Syrian people, we are providing substantial, non-lethal support to the nonviolent, democratic opposition movement and civil society, and to their efforts to organize at the community level and to expose the truth of the regime's atrocities.

Furthermore, we and other NATO allies are standing by Turkey to deter and defend against air or missile threats against Turkey by the Assad regime.

Finally, with regard to national security, American and Turkish law enforcement and other national security agencies consult and collaborate very closely to strengthen Turkey's borders against the transit of foreign terrorists and support for them into and from Syria. n

How does the United States plan to deal with al-Qaeda-affiliated groups and the ISIL in Syria?

As I've just mentioned, we will continue to work with Turkey and other friends of the Syrian people to oppose the transit of such terrorists to and from Syria, and to block the flow of support to them. This means strengthening international law enforcement and intelligence cooperation against them and building international support for the desperate, suffering communities upon which such groups prey. n

Observers point out that Turkey and the United States seem to have a different understanding of the events that occurred in Egypt last summer and since then. What do you think is behind the differences and how can they be overcome?

It is simply not true that we have stood aside silently in the face of the failure of Egyptian democracy's first steps last year, or such painful recent events as the daily terrorist violence, and the summary mass trials and death penalties. The White House and Secretary Kerry have spoken out clearly and repeatedly on these issues. Secretary Kerry stated on March 25: "I am deeply, deeply troubled by the sudden and unprecedented decision by an Egyptian court to issue preliminary death sentences. It simply defies logic… adhering to the new constitution and maintaining a criminal justice system free of intimidation and political retribution are essential functions of a legitimate government… I urge the interim Egyptian government to reverse the court ruling and ensure due process for the accused."

It's also important to recognize the complex realities of Egypt and the violent conflict among a kind and gentle people whom I came to know well and to admire during many years of living among them. If there is any difference of approach between the United States and Turkey toward Egypt, it might lie in the fact that we do continue to engage with the government of Egypt, even as we clearly express our opposition to some of its actions. We also stand against terrorist violence in solidarity with all the Egyptian people in a principled, sensitive and sympathetic manner in their time of suffering and conflict. We believe this approach offers the only hope to influence the situation for the better.

Prime Minister Recep Tayyip Erdoğan recently said he hoped the United States would extradite Fethullah Gülen. Can you comment on this?

We handle all extradition requests in strict confidence through official channels within the terms of our Mutual Legal Assistance Treaty. We decide such issues on the basis of legal merit, not as "political" questions. We do so always with full respect for each other's legal systems and national security interests, particularly where there is evidence of plotting or abetting terrorist violence against our citizens or our republics.

At the same time, our laws and traditions strictly protect freedom of belief and of expression for anyone present in our country. Since the outset last December, we have strenuously rejected any effort to inject this painful domestic dispute into American-Turkish relations, which are vitally important to both our countries.

How would you evaluate the Dec. 17 operation and illegal eavesdropping carried out by members of the Gülen Movement?

I believe that Turkey's foreign friends and allies were as shocked as Turks themselves.

On the one hand, citizens in any modern democracy naturally expect that serious charges of massive corruption will receive the most rigorous investigation and public scrutiny, through adversarial parliamentary debate and inquiry, through free and even aggressive independent media, and certainly by the legal system. In a state of law like yours or mine, evidence must be gathered, examined, and prosecuted strictly in accordance with the law. Impartial judges enjoying the confidence of their citizens must rule on the validity of any evidence presented by equally impartial prosecutors.

This is why we speak of the importance of such concepts as transparency, accountability, separation of powers, and checks and balances in a democratic state of law.

Citizens in a democracy deserve law enforcement, prosecution and judicial bodies which are each independent of each other, and accountable and loyal only to the people through the law of their republic, equidistant from all political parties, religious groupings or private interests.

What do you think about Irbil's recent announcement that it would sell Kurdish oil via Turkey without waiting for Baghdad's consent in terms of regional stability?

We hope to see all of Iraq, certainly including the Kurdistan Regional Government (KRG), maximize its production and export of energy resources through multiple channels, especially to and through Turkey - Iraq's most secure and economically efficient export route to European markets - in ways that will benefit all Iraqis and in accordance with Iraqi law and national interests. In general, we support any initiatives toward that objective and oppose any actions that might imperil Iraqi national unity and territorial integrity.

KRG and Turkish officials also announced depositing the oil revenues in a Turkish bank instead of a U.S. bank. Do you have any comment about this announcement?

Do you personally know your successor John Bass? Would you like say something about Bass?

I do indeed know Ambassador Bass as a friend and a respected colleague. If the White House nominates John Bass to succeed me, and if the Senate confirms his nomination, I would be very pleased that the stewardship of American-Turkish relations would pass to such an experienced and talented successor. I would caution, however, that there is no nomination until the White House announces the president's intent to nominate someone. Thereafter, as you know, under our system of checks and balances, the Senate will conduct its own confirmation process.

Do you have a plan to write a memoir of your time in Turkey?

Perhaps one day. I have loved serving in four separate assignments in Turkey for a total of nearly 10 years out of my 36-year career. This country is endlessly fascinating and we have made so many friends here.

It is special to my wife and me as the place where we started our family, where our daughters spent golden years of their childhoods, and where my wife has been able to pursue her own career as a scientist in collaboration with world-class Turkish colleagues.
For the coming few years, however, I expect to remain so fully engaged in world affairs in my new, private capacity, that I may have scant time to write about my own adventures and experiences as an American diplomat.

Which factors have affected your decision to change your career? Serving in the U.S. government has been the most meaningful career I could ever imagine. There certainly is beauty in bureaucracy.

But after so many years in a familiar organizational environment, I judged it was the right time in my own life to break out as a private citizen into a freer pursuit of intellectual interests and adventures in world affairs. I look forward to exploring still more of Turkey and her region, to staying in touch with old friends, and to making many new friends. Görüşmek üzere!
Last Update: May 12, 2014 1:21 am
RELATED TOPICS