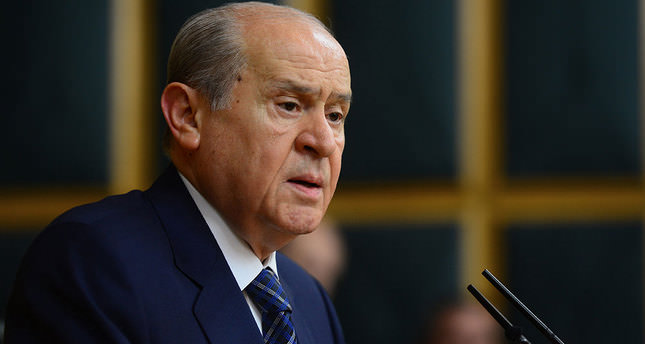 by AA May 13, 2014 12:00 am
ANKARA — Turkey's opposition Nationalist Movement Party (MHP) leader said the party's proposal to nominate a joint presidential candidate against the ruling party's would-be contender should be decided on by taking the national will into account, not just by "an accord of opposition parties."

Turks will go to polls on August 10 to choose their first popularly-elected president and the MHP confirmed that they will propose a joint candidate for presidential election who the party said can "embrace the entire nation."

Turkey's presidential hopefuls can submit their applications to the country's elections authority from 29 June until 3 July.

No candidate has emerged so far to run for Turkey's top post. The country's ruling Justice and Development Party has yet to slate a candidate but Prime Minister Recep Tayyip Erdoğan is considered by many to be the party's nominee.

Speaking at a group meeting of his party Tuesday, MHP leader Devlet Bahçeli said: "We continue our work to determine the candidate. We are not restricting our works. We are striving to get an auspicious result."
Bahçeli stressed that the presidency symbolizes "unity and solidarity" of the country, however, he added that they have always been "contentious, heated and stressed."

"All the values of the nation should gather in a president," said Bahçeli.

The constitution was amended in 2007 for the president to be elected by public vote, but the president's powers -- as a part of the executive body of the state -- have yet to be amended.