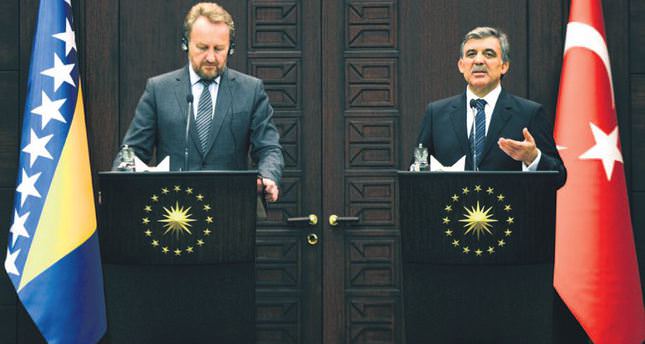 by Daily Sabah May 14, 2014 12:00 am
ISTANBUL — President Abdullah Gül met with his Bosnian counterpart Bakir Izetbegović on Monday to discuss the continuation of a centuries-old relationship between the Republic of Turkey and the Federation of Bosnia and Herzegovina. The two leaders met in Ankara to discuss the current condition of the ties between the two states and plans for future continuity. Describing the state of affairs between Turkey and Bosnia as "strong and special," Gül said, "Turkey has consistently aided Bosnia and will continue to do so."

Gül went on to say that Turkey and Bosnia currently maintain a trade volume of $400 million (TL 830 million) a year and that Turks invest $145 million in the country annually, however he believes that these figures are not substantial enough. "When we examine the opportunities and potential of the two nations we see how far from satisfactory these numbers are," said Gül. "On the other hand we have organizations like Ziraat Bank, the Turkish Cooperation and Development Agency [TİKA], the Yunus Emre Institute and Anadolu Agency that work toward the restoration of cultural heritage, the right of return of those who were displaced [by the war of 1991 to 1995], and economic upheaval to enrich life in Bosnia and Herzegovina. We will do everything in our power to continue these projects and more," he continued.

The meeting between Gül and Izetbegović came a little over a month after Turkish Minister of Economy Ali Babacan stated that Turkey's Eximbank was ready to finance major projects for the building of roads, energy and any infrastructure projects. Eximbank will be following in the steps of Turkish stateowned Ziraat Bank, the first international bank to open lines of credit to Bosnia after the war.

The president of Turkey's union of commerce, Mustafa Rifat Hisarcıklıoğlu, has also said that Turkish businesses are fully ready to undertake and invest in projects in Bosnia. As president Gül mentioned, TİKA and other Turkish firms have undertaken many projects aimed at restoring Bosnia's cultural heritage sites, many of which were damaged or destroyed during the Bosnian War of independence.
Among these many projects, the most notable are the restorations of historic Ottoman bridges in Konjic; Visegrad, the Sokullu Mehmet Paşa Bridge built by Mimar Sinan; and Mostar - the Stari Most had to be completely refurbished from stones found in the Neretva River after it was struck by three Croatian rockets in 1993.

Turkish investors were also behind the construction of the International University of Sarajevo which opened its doors in 2004. With the Dayton Accords of 1995, which saw Bosnia partitioned into two administrative centers, the Bosniak and Croat Federation of Bosnia and the Serbian Republic of Srpska, possibly coming to an end with a general election this October and as the most critical issue on the agenda, Gül endorsed Bakir Izetbegovic's election campaign. "For the joyful, secure and prosperous future of Bosnia, we will continue to work in close cooperation with my dear friend Bakir Izetbegović as we have until now. I am very happy to host the respected Izetbegovic in Ankara and would like to once again underline that he will be able to continue the strong ties between our two nations in the period to come," stated Gül.

Bakir Izetbegović is the son of Bosnia and Herzegovina's first President Alija Izetbegovic who in Turkey is admired for his scholastic and ideological work and the effort he invested to strengthen the ties between the two states.
Last Update: May 14, 2014 10:32 am
RELATED TOPICS