Condolences pour in over Turkey's coal mine fire 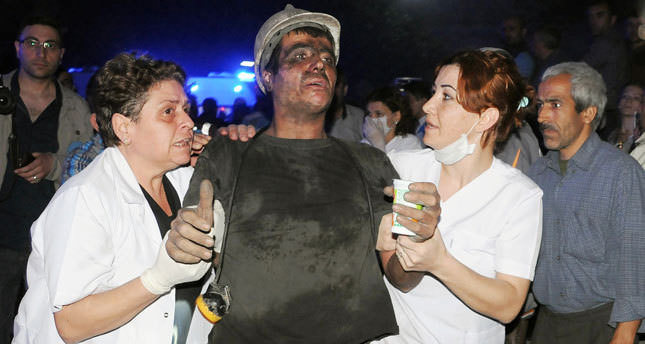 by AA May 15, 2014 12:00 am
ANKARA — EU Council President Herman Van Rompuy issued a written statement on behalf of the EU, saying, "I wish to express my sincere condolences and deep sympathy to the Turkish Government and to all those affected by the tragic mine accident in Soma." Council of Europe Secretary-General Thorbjorn Jagland also expressed his condolences for Turkey in a statement that said, "We are with our Turkish friends and share their sorrow."

Other European officials, including Martin Schulz, president of the European Parliament, Štefan Füle, European Commissioner for Enlargement and European Neighborhood Policy and European Commission in charge of Home Affairs Commissioner Cecilia Malmstrom have also sent their condolences to the families affected by this tragedy. Elsewhere, Swedish Foreign Minister Carl Bildt said, "My deep condolences to Turkey and all the relatives of the dead miners in Soma affected by this terrible accident," while the Spanish Foreign Ministry issued a message of condolence and stated their hopes that more miners can be saved. The British ambassador to Turkey, Richard Moore, in a statement, offered condolences to victims' families and said he is praying for the trapped miners.

Turkish Republic of Northern Cyprus Prime Minister Özkan Yorgancıoğlu also offered his condolences saying that all Turks are in deep sorrow because of the accident. Northern Cyprus announced a two-day period of national mourning. The Israeli Embassy in Ankara cancelled its national day reception on Wednesday due to the coal mine fire. "The State and people of Israel share the grief of the Turkish people and pay condolences to the families of the deceased, wishing a speedy recovery for the wounded and hope for positive news about the ones still in the mine," the embassy said in a written statement. Additionally the U.S. Ambassador in Ankara, Francis Ricciardone, offered his condolences on the official website of the embassy. "We are following the incidents about the mining disaster in Soma with deep sorrow. I convey my condolences to victims' families on behalf of the people of the United States," he said.

Qatari Emir Sheikh Tamim bin Hamad Al-Thani sent a cable of condolences to Turkish President Abdullah Gül and Prime Minister Recep Tayyip Erdoğan in which he expressed his sympathy for the families of the victims.