Kurdish oil ready for sale but agreement yet to be reached 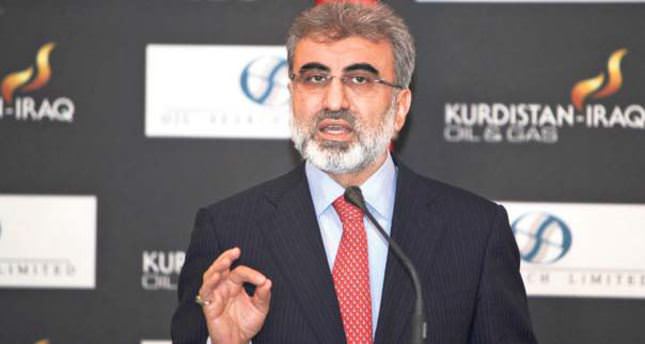 by May 15, 2014 12:00 am
ANKARA — Turkish Energy Minister Taner Yıldız stated on Tuesday that Kurdish oil is ready for export to international markets from Turkey's export hub, Ceyhan. "Our storage tanks in Ceyhan for Northern Iraqi oil are now full. There is no obstacle for the sale," Yıldız remarked. The energy minister also said that stored Kurdish oil at Ceyhan had reached 2.5 million barrels, the full capacity of the storage tanks. However, officials from the Turkish Ministry of Energy confirmed that there was no shipment from Ceyhan port as of late Wednesday. Moreover, Turkish officials recently announced several times that Turkey does not want to be involved in the sale of Kurdish oil. On this issue, Yıldız stated that the oil belongs to Iraqis and they are the ones who will sell it. "Drilled oil belongs to the whole of Iraq and the oil to be drilled in Iraqi regions will be gathered in a shared pool. Turkey aspires to expand that shared pool to be used for Iraq's service, and our endeavors should be evaluated in this regard," Yıldız stated.

Iraq's central government opposes the sale of the oil, saying it violates the federal constitution and bypasses the country's national oil company, State Oil Marketing Company. Baghdad says oil sales should be overseen by the central government and it considers any independent oil exports as tantamount to smuggling. On the other hand, President of the Kurdistan Regional Government (KRG) Masoud Barzani said there is no going back in Irbil's decision to export oil independently despite Baghdad's opposition. Barzani stated on Tuesday that the region will continue producing and selling oil, emphasizing that Kurds would hold a referendum on independence if Baghdad pushed them too far.

Furthermore, Baghdad insists that oil revenues generated from the sales must be deposited in a fund with U.S. JP Morgan Chase Bank, whereas the Kurdish government and Ankara agreed that the revenues would be kept at Halkbank, Turkey's state-owned lender. Regarding this issue, Taner Yıldız said officials from Baghdad, Irbil and Turkey will supervise the sales and the money of the oil will be deposited into Turkey's Halk Bank.

The U.S. Ambassador to Turkey, Francis J. Ricciardone, recently stated that the U.S. has no objection to depositing the oil revenues in a Turkish bank instead of a U.S. bank. "These are important business matters for the Iraqis and their customers to sort out.

We have absolutely no objection if the Iraqis and their customers decide to conduct their financial transactions through a Turkish bank or some other country's bank," Ambassador Ricciardone remarked in an exclusive interview to Daily Sabah.

The U.S.-led invasion of Iraq in 2003 allowed the Kurds to control a 17 percent share of oil revenues, although Kurdish authorities
frequently complain that they receive less than their rightful share. However, the absence of a comprehensive hydro-carbon law is the main reason for this long-lasting dispute.

The Iraq hydrocarbon law would take the majority of Iraq's oil out of the exclusive hands of the Iraqi central government and open it to international oil companies for a generation or more. On the other hand, Kurds believe that under the constitution, they have the right to develop their natural resources, too.

Haji Issa added that this law has become a "dispute point, not only between Baghdad and Irbil, but with other provinces as well." At the beginning of the May, KRG officials announced that oil shipments from Irbil to Ceyhan had resumed, including 100,000 barrels per day (bpd) through a pipeline. The KRG's total production capacity is currently slightly more than 400,000 bpd and it plans to increase this amount to 1 million bpd in 2015 and 2 million bpd in 2019.

The KRG controls an estimated 40 billion to 45 billion barrels of oil as well as 6 trillion to 7 trillion cubic feet of natural gas in reserves with an estimated combined worth of $5 trillion. Irbil plans to export over 2 million barrels of oil per day and 20 billion to 30 billion cubic meters of natural gas per year via Ceyhan to generate a $100 billion annual turnover. The Turkish government believes that accumulating Kurdish oil revenue in a Turkish bank would contribute to the country's potential to become a leading player in world energy markets.
Last Update: May 15, 2014 1:51 am
RELATED TOPICS