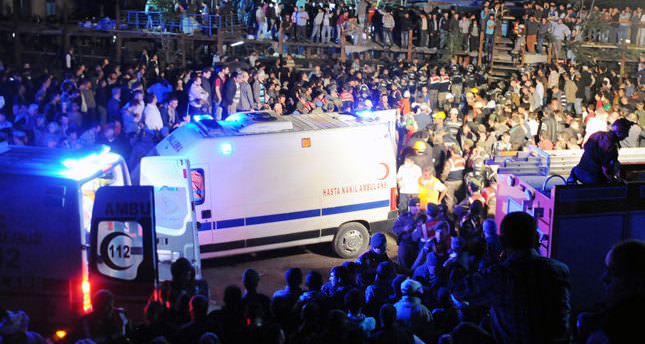 by Daily Sabah May 15, 2014 12:00 am
ISATNBUL — Numerous figures from opposition parties have made statements about the tragedy that took place in Soma, Manisa, on Tuesday night and expressed their condolences and prayers for the victims and their families. Demir Çelik, the People's Democracy Party's (HDP) deputy from Muş, in a press statement in Parliament commented on the Soma Coal Mine tragedy that resulted in the deaths of hundreds of workers who were trapped underground. Expressing his deep sadness about the issue, Çelik stated that Turkey ranked first among European nations and sixth in the world in terms of laborer deaths, a figure Çelik claimed Turkey does not deserve and called on Parliament to take immediate action. "While one person dies for the production of 1 million tons of coal in China and the U.S., this figure increases to five people in Turkey," said Çelik, who noted Turkey too could have taken the necessary precautions to prevent such tragedies from occurring. Veli Ağbaba, the Republican People's Party (CHP) vice chairman stated that he sent a memorandum to municipalities to avoid celebrations on May 19, a day of national celebration for youth and sports. CHP leader Kemal Kılıçdaroğlu also visited Soma and promised all citizens that as the CHP they will be closely looking into the issue.

Nationalist Movement Party (MHP) leader Devlet Bahçeli also expressed his concern and sadness about the matter and stated, "It is one of the worst terrifying incidents in recent years" and touched upon the fact that time is working against those who are still trapped underground. Noting that the government was using all means possible to rescue the victims, Bahçeli emphasized the idea that everyone was praying for them and wished a speedy recovery for those who have been rescued.
RELATED TOPICS