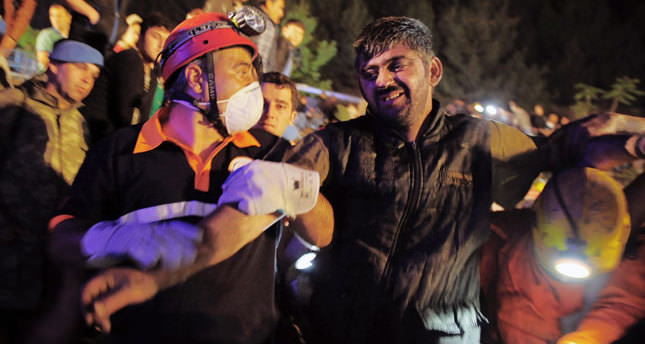 by Daily Sabah May 15, 2014 12:00 am
ANKARA — Prime Minister Recep Tayyip Erdoğan has declared three days of mourning for the hundreds of victims of Tuesday's coalmine fire. Cancelling his program, Erdoğan arrived in Soma yesterday to get more details concerning the rescue work. Erdoğan first went to the crisis management center established by the Manisa Governor to obtain information on the Soma coal mine tragedy. Prior to his official visit to Soma, he wished patience to all of the families involved in the Soma coal mine accident. "We should start receiving a clearer understanding and contentment very soon," Prime Minister Erdoğan said.

Accompanied by deputy prime ministers Bülent Arınç and Beşir Atalay, Interior Minister Efkan Ala and Health Minister Mehmet Müezzinoğlu, Erdoğan inspected the coalmine where the search and rescue operations are still continuing. In a press conference, Erdoğan offered his condolences to the families of miners who lost their lives in the coal mine fire. Erdoğan stated that Turkey witnessed the biggest work accident in its history, and officially 238 miners lost their lives, while 80 miners are injured.

Erdoğan thanked press members who have carried out their duties with responsibility. He said that all means of the government were mobilized to Soma to rescue the miners. He continued, "Since the trapped miners had no identity cards while working in the coal mine, their bodies were identified by their families. Judicial and administrative investigations will be launched. This accident will be investigated down to the last detail. We will never let this incident be disregarded."