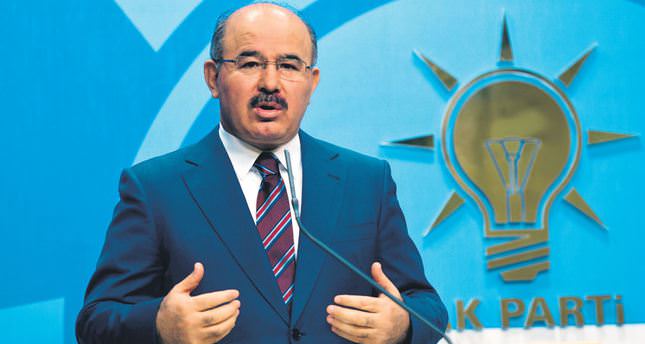 by Daily Sabah May 17, 2014 12:00 am
ISTANBUL — AK Party Spokesperson Hüseyin Çelik yesterday vowed the government will work to bring safety standards up to speed following the Soma mining disaster but believes mourning the loss of miners is a higher priority than investigating at the moment. The spokesman highlighted that providing every opportunity to reduce workplace accidents is the duty and responsibility of both the Turkish state and the nation, saying that everything necessary will be done regarding the Soma tragedy.

He stated since the beginning of the incident that the deputy minister of the Ministry of Labor and Social Security, officials of Disaster and Emergency Management Presidency and officials of the Turkey Coal General Directorate and Health Ministry have been performing their duties to rescue the miners. "The government has officially launched judicial and administrative investigation into the incident and if there is any negligence, it will be determined," said Çelik. "It is the human duty for those who are accountable for negligence or deficiency to do what is necessary."

Çelik stated that the incident was the worst work-related accident in Turkey's history but believes now is not the time to point fingers. "It is not the time to find out the reason of the explosion. Firstly, we should heal the wounds of the families. The nation has a right to call officials to account and the officials have to pay the price. Inspections regarding the mine have been carried out. The inspection report in 2009 determined three infringements of rules; it is not true to mention an inspection problem."

Çelik reiterated that Turkish President Abdullah Gül, the Prime Minister Recep Tayyip Erdoğan arrived in Soma and congratulated the main opposition Republican People's Party (CHP) leader Kemal Kılıçdaroğlu and Nationalist Movement Party (MHP) leader Devlet Bahçeli for arriving to Soma to get detailed information on the incident. Çelik stated that mining is a risky sector and said incidents need to be minimized, but Turkey is not currently at the required level and that there is a long way to go to minimize work accidents in Turkey. Harshly criticizing trade unions, Çelik claimed that unions are only interested with taking to the streets on Labor Day and that media outlets which provided insufficient information should be self-critical.

Çelik further thanked all the people who tried to provide aid to Soma locals and added that sports club, banks, charitable people have tried to do their best to help Soma locals, but Turkey needs to take a lesson from the disaster and prevent further incidents.

Meanwhile, CHP officials, who established a crisis desk in Soma, put Soma Holding under the microscope and have started to determine negligence in the coal mine and are expected to prepare a detailed report on the incident to present to Kılıçdaroğlu. MHP officials in Soma also prepared a report and presented it to the MHP's administration board. The party asserted that the report includes allegations about negligence in the coal mine. Regarding Energy Minister Taner Yıldız, it was stated in the report that he arrived to Soma right after the incident and participated in the rescue works, while other ministers were criticized. The report placed further stress on the necessity of a detailed inspection.

The AK Party proposed a motion to establish a committee to investigate the Soma disaster. Turkey's top judicial body appointed 28 prosecutors to coordinate investigations into the Soma disaster. Prosecutors from surrounding cities and towns were appointed by the Supreme Council of Judges and Prosecutors to oversee the post-mortem operations on bodies brought out from the Soma mine. Turkey's prosecutors appointed to investigate the Soma mine accident have begun to collect testimonies from witnesses and victims, according to the prosecutor's office. The views of an occupational safety expert committee, composed of electrical engineers and experts in mining, will also be included in the investigation. Prosecutors on duty in Soma are taking necessary measures to identify evidence at the scene of the accident, the prosecutor's office announced.
Last Update: May 17, 2014 2:19 am
RELATED TOPICS