We teach Turkish to the world, says Hayati Develi 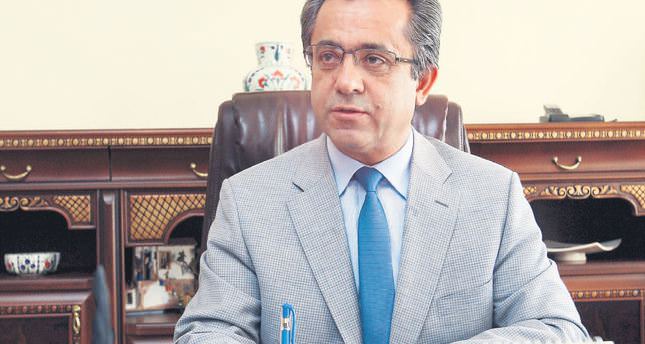 ANKARA — In today's world foreign policy is carried out not only diplomatically but also in cultural, economic and trade networks. The Yunus Emre Institute was founded six years ago with the expressed aim of promoting and teaching Turkish culture, history, language and literature. In the past six years the Institute has established a total of 35 centers in 28 countries.

Can you tell us more about the institute? The Yunus Emre Institute was established to promote Turkey's cultural heritage, the Turkish language, culture and art and deepen ties with other countries, but also to engage in cultural exchanges and provide courses on the Turkish language, culture and art internationally. In international literature our institute is known as one which is active in cultural diplomacy. We have been active since 2009 and in the past six years, we have established 35 centers in 28 countries.
From Tokyo to London, from Morocco to Cairo and South Africa, our institutes cover a large geography.

The reason for this is that our historical and cultural ties with the region [go back many centuries] and the local populations were keen for our centers to open. In the coming years we expect to open centers in North America sub-Saharan Africa and South America.

Why did many feel the institute needed to be founded? Post-1990s and during the 2000s Turkey felt the need to expand on the international scene first economically, then culturally. During the 1990s our regions experienced two critical events of change. The first of these was the collapse of the Soviet Union and the other the fragmentation of Yugoslavia. After these events Turkey renewed its ties with the Balkans and Caucasus. Furthermore new relations with Central Asian countries, based on our historical and cultural ties, were possible. These events changed our mentality as a country.

Similarly across the globe, countries that wish to take their country's image to a higher level are doing so through the establishment of cultural centers. Emerging economic powers such as China, Korea and Russia are all aware that in order to increase influence this must be done through attaining a higher cultural status.

We can consider the establishment of the Yunus Emre Institute in this light.

Why was the name Yunus Emre chosen for this institution? Cultural relations are what make friendships long lasting between people.
When we get to know a people culturally, we can establish relations with a greater emphasis on friendship. Yunus Emre was a pioneering mystic poet from Anatolia and the first to do so in the Turkish language.

Thus it was deemed appropriate to immortalize our poet, Yunus Emre, who once uttered "love the created more than the creator" by naming our cultural diplomacy centers after him. As an institution we are tasked with teaching Turkish.

Yunus Emre was a founder of Anatolian Turkish and a poet who's masterful use of the language, thus his name was fitting.

What problems come with fast growth? Where do you find the personnel? In terms of our Turkish courses, many of our universities have a faculty of Turkish Language & Literature or similar departments.

We train graduates from these departments in how to teach foreigners Turkish. Once their training is complete they can be sent abroad to teach in our centers. We do not have any human resource problems in terms of our Turkish courses. However we do, from time to time, have problems with finding personnel for cultural events. As we are active in several different languages, ideally we want our managers as cultural experts to know the local language.

Where we really have problems is finding personnel who are trained in the arts and world cultures, and are knowledgeable about cultural industry and events organization. I believe in the future, more people with such qualifications will be emerging from Turkey and also we are working toward ensuring Yunus Emre will be an institute that helps trains people [to exhibit these] qualities.

Which centers draw the most interest? When we consider Turkish courses on the basis of numbers, our Cairo branch has the highest number of students. Despite the coup in Egypt in the past year, followed by a suspension in diplomatic relations, our cultural activities have not been affected. Other centers that receive a lot of interest are Tehran, Sarajevo, Tbilisi, Baku and London. I can say with great pleasure that all our centers across the globe are full of students.

Participation in our cultural activities is very high. The intelligentsia of the countries we are active in closely follow exhibitions, seminars and the likes. They don't only want to be informed about Turkey's economic and diplomatic developments but also be better informed culturally. The popularity of Turkish films and soap operas across the world has contributed to the growth in interest.

As an institution what are your flagship projects? Currently we have a couple of longterm projects. One of these is the 100 Turkey Libraries project which is aiming to bring together a collection of 2,000 important works, reference books, novels, stories and poetry, which with reflect Turkey in the right light. We are planning for this collection to be housed in various national libraries and universities across the world in a "Turkey Room." So far we have completed 56 libraries and expect to complete a further 44 in the next two years. Developing Turkish artisan craftsmanship in the Balkans is another project.

The cultural richness that living side by side with the peoples of the Balkans has given us over the years can be seen in the xylography, silver smithing, glass [fabrication], mother of pearl inlay and other type of artisan crafts. We aim to breathe new life into these skills with new projects. We currently have 2,500 capacity courses for this project.

Another project is about the protection of cultural heritage of the Balkans. This project aims to protect our inscriptions, carry out restoration and create digital records as well as train the artisans required for restoration work.

Furthermore, for documents to be read and analyzed, providing Ottoman language courses is among our activities. Every year at important centers around the world we promote Turkish music, art, cuisine through various events.

What is the decision process for opening courses? We inform our centers of the possible courses and measure the level of interest.
If there is enough interest, we then contact the master teachers in the Ministry of Culture database to determine whether they are willing to teach abroad.

Currently our courses are continuing in Sarajevo, Tirana and Bucharest as well as other Balkan capitals. With this project we are preventing these artisan crafts from being forgotten and instead helping knowledge be passed down to new generations. For example currently in Skopje's bazaar there's not a single object on sale that was created using Ottoman crafts. But with the continuation of these courses, in a few years it will be possible to find mother of pearl inlaid pieces or silversmith objects.
Last Update: May 19, 2014 1:47 am
RELATED TOPICS