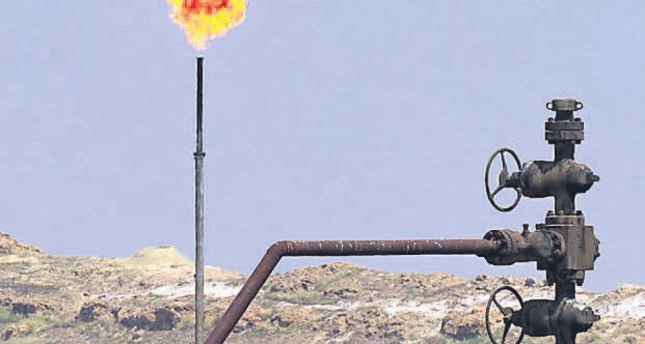 by Ali Ünal May 20, 2014 12:00 am
ANKARA — Baghdad and Irbil resumed negotiations last weekend after a few failed attempts in recent months to solve the ongoing disputes over sharing oil revenues. Kurdish media outlet Rudaw reported that Iraq's acting Finance Minister Safadin Safee said Saturday that Baghdad and Irbil should continue to look for solutions to their serious disputes over the budget, even though the current year's national budget still has not made it through parliament. The annual budget of the Iraqi central government has to be accepted by the parliament within one month and decisions regarding the Kurdish share of the federal budget will need to be confirmed after the agreement between Baghdad and Irbil over oil.

The central government and the Kurds differ over their interpretations of the Iraqi constitution's references relevant to the distribution of oil revenues. According to the Iraqi constitution, Kurds control only a 17 percent share of oil revenues, although Kurdish authorities frequently complain that they receive less than their rightful share. However, according to some independent studies, the KRG's portion has been receiving 10.5 percent instead of the 17 percent stipulated in the constitution. This has in turn affected the KRG's economy negatively and in recent months the Irbil administration had difficulties paying civil servants' salaries.

Iraq's central government opposes the sale of the oil, saying it violates the federal constitution. Baghdad says oil sales should be overseen by the central government. Declaring the exports of KRG oil via pipeline to the Turkish port of Ceyhan "illegal," it's threatening to sue any company lifting Kurdish oil at Ceyhan.

In addition, leaders of political parties in the KRG met with President Massoud Barzani over the weekend and agreed on a plan over how to deal with the central government and expedite the formation of a new cabinet in Irbil. Kurdish media outlets reported that in the meeting the Kurdish leaders were united in their opposition to Nouri al-Maliki's third term as Iraq's prime minister.

Moreover, Kurds also agreed that they will hold a referendum on independence and separation from Iraq if Maliki is nominated for a third term. Furthermore, Masoud Barzani remarked earlier that there is no going back in Irbil's decision to export oil independently despite Baghdad's opposition. Barzani stated on Tuesday that the region will continue producing and selling oil, emphasizing that Kurds would hold a referendum on independence if Baghdad pushed them too far.

Amid tensions between Irbil and Baghdad, Turkish authorities maintained their calm and expected both sides to reach another agreement. Moreover, Turkish officials recently announced several times that Turkey does not want to be involved in the sale of Kurdish oil. Regarding this issue Turkish Energy Minister Taner Yıldız stated that the oil belongs to Iraqis and they are the ones who will sell it.

Allegations concerning the export of KRG oil from the Turkish city of Ceyhan continues to foster tensions between Irbil and Baghdad. Last Friday, Reuters news agency reported that Israeli and U.S. oil refineries had started to buy oil from the KRG. According to the agency, Israel has been importing crude oil since January, and the U.S. imported its first crude cargo from the region two weeks ago. However, Kurdish officials rejected the claims. "Kurdistan oil has so far not been sold. But the KRG's hands are open to sell," KRG spokesperson Safin Dizayee told Rudaw, a Kurdish news agency.

This has not stopped Baghdad from looking into another matter, allegations that the KRG is exporting oil to Israel. Iraqi parliamentary and Member of Energy Commission Rihad Abuda asked for a thorough investigation into the KRG's alleged export of oil to Israel. Abuda stated that the KRG will face great legal consequences if the report proves to be accurate.

However, sources from Turkish energy ministry denied allegations and stated that there were no shipments from Ceyhan as of late Monday. Sources also added that stored Kurdish oil in Ceyhan had reached 3 million barrels.

Negotiations between KRG officials and the central government have been ongoing since last December and it was interrupted several times due to the uncompromising attitude of Baghdad. Baghdad has softened its discourse toward the KRG since the elections.

However, despite this development the Kurds seems to have lost their faith in Baghdad and are likely to continue to pursue possibilities to finance their own budget via oil export.

Baghdad administration eases its stance towards the sale of the Kurdish oil via Turkey to Israel and the U.S. as the three countries have almost agreed with the KRG for the sale according to the officials

The Iraqi central government and the Kurdish Regional Government (KRG) have continued negotiations but failed to reach a consensus over the annual budget allocated to the KRG and the distribution of oil income from the north of the country. However, recent statements by Iraqi officials are being considered by some as a sign that Baghdad is softening its stance over sharing disputed oil revenues. KRG officials previously said Baghdad's intransigence was forcing them to act unilaterally. Baghdad and Irbil resumed negotiations last weekend after a few failed attempts in recent months to solve the ongoing dispute over sharing oil revenues.
Last Update: May 20, 2014 1:31 am
RELATED TOPICS