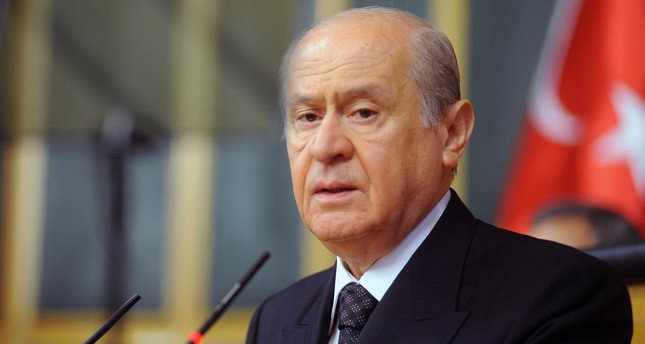 by Daily Sabah May 21, 2014 12:00 am
ISTANBUL — The opposition continues its efforts to agree on a joint candidate for the presidential election. Earlier this month, far-right Nationalist Movement Party (MHP) leader Devlet Bahçeli suggested that opposition parties should unite on a joint candidate in the presidential elections on Aug. 10 to prevent the AK Party's candidate - likely to be current Prime Minister Recep Tayyip Erdoğan - from garnering a majority of the votes. Since then Bahçeli has been consulting with various people on how to proceed to find a viable candidate to run against Erdoğan.

As part of Bahçeli's efforts to gain support from other parties and nongovernmental organizations, he continues to hold talks with former presidents. Bahçeli met with former President Ahmet Necdet Sezer yesterday and is expected to meet with current President Abdullah Gul on Wednesday regarding the joint candidate suggestion of the MHP for the presidential election.

Speaking at a party group meeting, opposition Nationalist Movement Party (MHP) leader Devlet Bahceli said that those who live in Soma are not the only ones aggrieved by the tragedy, their grief is shared by all Turkish citizens. Bahceli stated that Turkey should not walk away from the horror of the events and called for an improvement in working conditions for miners in Turkey. He also said that those who are responsible for the tragedy should be held accountable as soon as possible.

The opposition leader praised Turkish Energy Minister Taner Yıldız over his continuous effort, patience and right-minded attitude during rescue works in Soma. He also thanked nongovernmental organizations, experts and governmental officials who worked in the mine to save the trapped miners.

Criticizing the owners of the mine, Bahceli said, "Contrary to the allegations, it is understood that inspection deficiencies are at the highest level in the mine. Work safety and workers' health principles were completely ignored to lower the costs of production."

Bahceli slammed Minister of Labor and Social Security Faruk Celik for his statements that no deficiency was detected in the mine during the March 2014 inspections.
Last Update: May 21, 2014 1:47 am
RELATED TOPICS