PM continues to condemn hate speech over mine tragedy 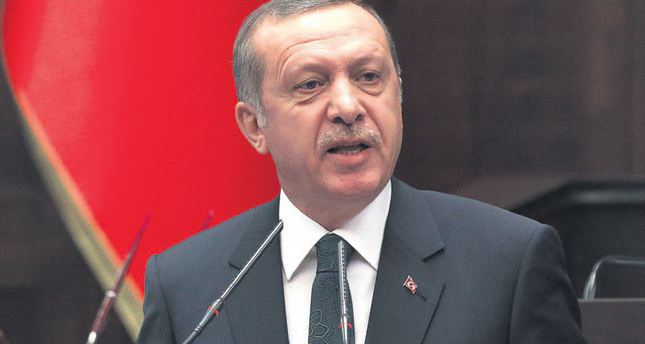 Erdoğan lambasted remarks written by columnists in the Turkish dailies Hürriyet and Gülenaffiliated Zaman over the Soma mine tragedy at the AK Party meeting yesterday, labeling them as hate speech

ISTANBUL — At a party group meeting, AK Party leader and Turkish Prime Minister Recep Tayyip Erdoğan yesterday touched on last week's Soma mine tragedy which claimed the lives of 301 miners in the western city of Manisa. After a minute of silence and prayer for those who lost their lives, Erdoğan delivered his condolences to the families and loved ones of the miners. During his speech, Erdoğan stated that Energy Minister Taner Yıldız arrived to Soma right after the incident along with a team from the Presidency of Disaster and Emergency Management (AFAD) and mining experts.

Erdoğan thanked Yıldız, Deputy Minister of Health Agah Kafkas and Deputy Minister of Labor and Social Security Halil Etyemez for their continuous efforts to coordinate rescue efforts in Soma. He praised nongovernmental organizations, government officials, doctors and nurses for their supports both to the families and the miners who were rescued.

Erdoğan criticized and condemned Hurriyet columnist Yılmaz Ozdil for saying in a televised interview that "the workers who died in the mining accident are those who were paid and transported to Erdoğan's campaign meetings [during the local elections]. The AK Party put money in their pockets so they could cheer for the party. I think the accident was not unusual and I would say it served them right."

The prime minister also denounced the media giant Yılmaz Ozdil who said the miners in Soma deserved to die as they voted for the AK Party in the last elections, for pointing out that the columnist was not dismissed or given a warning for his remarks. "We are a nation with a conscience and such a nation would undoubtedly have a state with a conscience," Erdoğan exclaimed, adding that, "There are unfortunately heartless individuals who do not have a bit of humanity left in them and lack the ethical values to sympathize with those who suffer," said Erdoğan.

Condemning allegations on social media regarding the Soma disaster, Erdoğan stated that those who lied regarding the incident tried to gain ideological or political benefit from the incident by posting information that is untrue. Erdoğan denounced Yazgulu Aldoğan, a journalist at Posta newspaper who published similar defamatory remarks on Twitter when she stated she was sick of hearing people call the workers martyrs and claimed they were not martyrs as they allegedly "died of a stupid cause" instead of a noble one. Erdoğan also lambasted Ali Unal, a writer at Daily Zaman, a Turkish-language newspaper affiliated with the Gulen Movement, due to his remarks that Soma is a calamity that Turkey experienced after U.S. based scholar and the head of Gulen Movement, Fethullah Gulen leveled a "curse" on the government. "Poor fellow [Ali Unal]. He thought that the curse of his leader [Fethullah Gulen] took effect on innocent miners in Soma. Shame on you, not only for your [Gulen Movement] immoral attacks on Turkey and the nation but also for the religion," said Erdoğan.

The Gulen Movement is an organization whose members occupy or have occupied top positions in the Turkish police and judiciary, and was behind the Dec. 17 operation, an attempt to bring down the government through a purported graft probe targeting top ministers and their families.

The prime minister stated that the government will support families of miners morally and financially. "The Ministry of Labor and Social Security, Ministry of Energy and Natural Sources, Ministry of Families and Social Policies, Ministry of Health will work to meet the families' needs. If it is necessary, they [ministries] will contact with each families suffered from the disaster," added the prime minister. He stated that the prime ministry started an aid campaign through the AFAD and certain associations. Erdoğan continued, "The bank account has already opened by AFAD only to aid families in Soma. The aid process will continue." "No one can cover the Soma tragedy. Those who are accountable for this disaster cannot hide themselves. Both an administrative and judicial investigation will be continued into the incident.

We [the government] will follow this incident down to the latest detail. If those who are responsible are under our authority, we will hold them accountable. We are determined to increase inspections, make up deficiencies and take the necessary steps regarding the tragedy." Touching on the condolences delivered by abroad, Erdoğan thanked presidents, prime ministers and ministers of those countries. "They [governmental officials of other countries] called us to share in our pain. Pakistan declared a day of national mourning for the Soma tragedy," said Erdoğan, who added that he thanked Norway and Israel, which both cancelled official functions in Ankara.

Regarding flooding in the Balkans, which is accepted as one of the worst floods in a century, Erdoğan stated that Turkey has shared in the pain of Bosnia and Herzegovina and Serbia and added that he held talks with President of Bosnia and Herzegovina Bakir Izetbegovi? over the flood and Turkey reached its aids to the region. "What is necessary regarding the flood has been done by Turkish Red Crescent, Turkish Presidency of Disaster and Emergency Management and other aid agencies in Turkey. Our [Turkey] aid teams are there [Bosnia]. TİKA has also been in the region since the beginning of the flood," said the prime minister.
Last Update: May 21, 2014 1:34 am
RELATED TOPICS