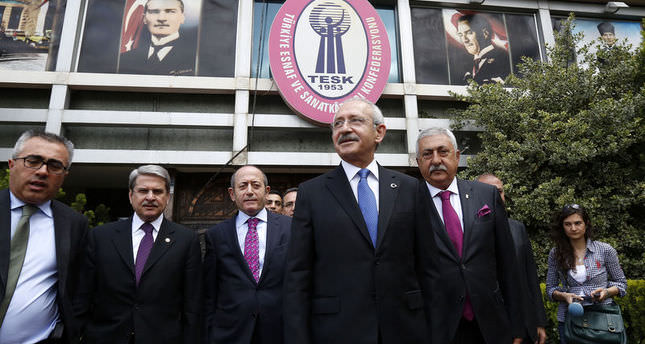 ANKARA — The leader of Turkey's main opposition met on Wednesday the chairman of the union of small businesses to discuss who they will nominate to run for president in the elections on August 10.

"I hope that we can decide upon a nominee who believes in supremacy of law and democracy, suits Turkey and evokes respectability in the world, and embraces the entire nation," said Kemal Kılıçdaroğlu (CHP) leader.

Kılıçdaroğlu added that they are looking for a nominee who is not blaming anyone, rather prioritizing wisdom.

Bendevi Palandöken, Chairman of the Turkish Confederation of Tradesmen and Craftsmen (TESK), said "since the presidency is the highest institution, the candidate should get the support of both public and parliament."

For the first time Turks will elect their president with their will and conscience, said Palandöken.

Candidates for the August 10 presidential election can submit their applications to the country's elections authority from June 29 to July 3.

It will be the first time that the country's president will be elected by direct popular vote.

A candidate needs more than 50 percent of the popular vote to be elected in the first round. If no one receives the required percentage, there will be a second round on August 24 between the two candidates who received the most votes in the first.