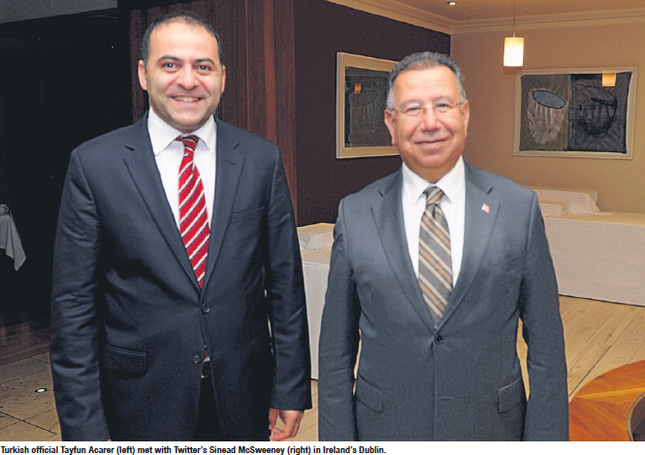 After Turkey temporarily banned Twitter during the March 30 local elections due to the violation of personal rights, Twitter officials and telecommunications authorities held talks in Turkey on April 14 as a first step to building a working relationship. The meeting in Dublin is accepted as the second step to reaching a compromise in this regard. Turkish officials announced that Twitter would establish a "live customer hotline" in Turkish to handle Turkish citizens' complaints regarding violations of personal rights and avoid settling such issues in court.

Stating that the first meeting held in Ankara was to officially contact Twitter and the second meeting in Ireland is to hold talks on technical issues, Acarer said that Turkey witnessed that court verdicts over Twitter either reached Twitter late or were never received, but the latest contacts ensure that court verdicts would reach Twitter faster.

"Turkey is not a country that can be disregarded easily. We [Turkish and Twitter officials] held talks for three hours. If there is any threatening against individuals on Twitter, there is even no need to resort to the courts because the everyday life of the individual who is threatened is in dire straits."

Acarer continued, "After the talks with Twitter are finalized, a system will be set up [for the] Access Providers Union to handle complaints. We [Turkish officials] are here to request the implementation of court verdicts and we want to hand over the system to be established to the union."

One of the Turkish officials who participated in the meeting in Ireland, Ömer Fatih Sayan, said Turkey's talks with Twitter officials should serve to improve cooperation between the two sides. Twitter representatives are expected to arrive to Istanbul in June to hold further talks.

On Access Providers Union, the Daily Sabah source said, "This union is nongovernmental and it will function as a reference point to handle Turkish citizens' demands and complaints concerning the Internet and social media. The union will abide by the law."

The source pointed out there was a perception that Turkey was in fight with Twitter and social media, but the meetings swept those prejudices and the unwanted perception against Turkey.

Regarding the allegations that Turkey demands Twitter open an office in Turkey, the source said that Twitter does not find opening an office effective for now, but opening an office is not the main reason of the talks between Turkish officials and Twitter.

When asked how the "live customer hotline" will function, the source stated that it will be responsible with responding to demands and complaints of citizens immediately and deal with giving support while filling out complaint forms on Twitter or delivering a court decision and added that the hotline is a goodwill gesture of Twitter officials to its Turkish users.

The Twitter issue emerged in Turkey after the government blocked the social media platform following several courts ruling to protect many users against privacy violations prior to the March 30 elections. The ban was lifted by the Constitutional Court after Kerem Altıparmak, an assistant professor at the Political Science Department in Ankara University and Yaman Akdeniz from Faculty of Law at Bilgi University filed an appeal to the Constitutional Court on March 24, arguing the ban on Twitter was against the fifth clause of the 49th Article of Law No. 6216 of the Constitution, against freedom of speech guaranteed by the Constitution and against the European Declaration of Human Rights.
Last Update: May 22, 2014 10:40 am
RELATED TOPICS