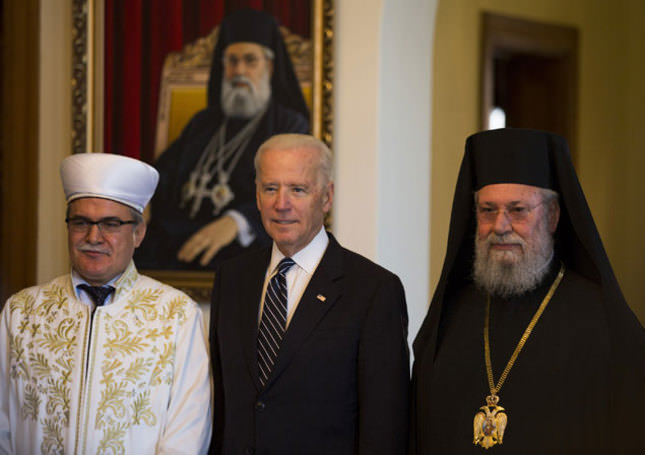 U.S. Vice President Biden arrives in Cyprus to provide a boost to talks that will lead to a unified island

He was greeted by Foreign Minister Ioannis Kasoulides and U.S. Ambassador John Koenig. In a brief statement on arrival, Biden said he had been looking forward to the visit for a long time.

"I came here at the invitation of your president and the government of the Republic of Cyprus and I wanted to come to primarily underscore the value the United States attaches to our growing cooperation with the Republic of Cyprus. This relationship is now a genuine strategic partnership and it holds even greater promise," Biden said.

"President Nicos Anastasiades and I will meet on Thursday to a shared agenda, which will include Cyprus' growing leadership in the eastern Mediterranean, Cyprus' support for the mission to eliminate chemical weapons from Syria and help prevent Iran from acquiring a nuclear weapon, its role in Europe and in regional energy security and continued cooperation on search and rescue, crisis response and counterterrorism," he continued

"There's much to discuss," Biden said, adding that he and Anastasiades would also discuss the situation in Ukraine. "We have to be resolute and united in the face of Russian intervention," Biden warned. He said he also knew that the Cypriot people had faced tough economic challenges and made painful sacrifices but he was pleased to see the government making good on the progress of economic reform.

"I believe the economy is beginning to turn the corner and we look forward to working with you to deepen our trade involvement and restore growth and prosperity," Biden stated, adding that the Cyprus settlement process would be "an important focus of conversations."

On Thursday, Biden will meet with Turkish Cypriot community leader Derviş Eroğlu amidst fervent protests mainly from opposition parties arguing that by meeting with Eroğlu in the north, the U.S. official would lend recognition to the break-away state.
Biden said he was encouraged by the steps that had recently been taken, the joint declaration on Feb. 11, the visit of the Greek Cypriot negotiator to Ankara and the Turkish Cypriot negotiator to Athens, support from the international community, and "the seriousness of purpose we've seen in this process thus far."

"After so many rounds of talks and so many years of stalemates, it's legitimate to ask the question whether this time can be any different," Biden said. He noted that the question reminded him of the words of former colleague George Mitchell, the U.S. envoy for Northern Ireland, whom he quoted as saying: "We had 700 days of failure and one day of success."

"Peace is always possible," Biden affirmed. "But it requires engagement, not just from leaders but from citizens. In that respect I'm encouraged to hear about the joint initiatives from Cypriot political and civic and business leaders, historic religious services and dialogue, and the restoration of sacred sites throughout the island.

"I have heard that the local press assumes I'm coming with a plan for peace in my back pocket to solve the Cyprus problem. I'd like to put that rumor to rest. I came here on behalf of the United States to help you get a solution, not to present or impose one," he said.

The U.S. vice president said he had been personally following events in Cyprus for more than 40 years, "long enough to know that only Cypriots can decide on a vision for [their] future and only Cypriots can exercise the courage necessary to make that vision real."
"Imagine what can happen if you make sure that this time is different, that this time a solution is reached," he proposed, noting that it would mean greater prosperity, greater security and a future of limitless possibilities for a generation free from the strait jacket that decades of division had imposed on the island.

"This island can and should be the bedrock of stability and opportunity for Europe and for the Eastern Mediterranean," Biden said.
He said the story of the 20th century in Europe was one where barriers fell and peace and prosperity rose up in their place.

"That can and should happen on this beautiful island. I traveled to Cyprus today because I believe this time can be different.

Whether it will, depends on the people of this island," he concluded.