More dialogue is the key to better Turkish-American relations 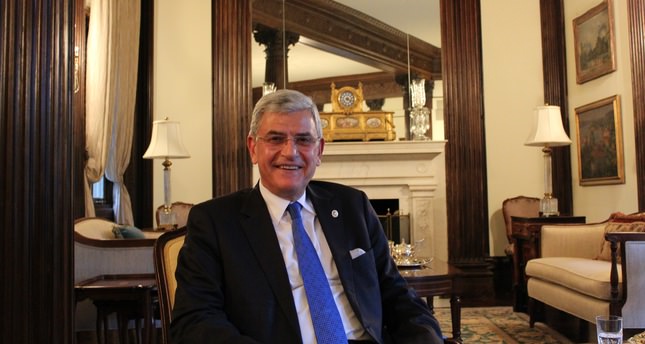 by Ragıp Soylu
May 22, 2014 12:00 am
WASHINGTON D.C. — The growing criticism against the Turkish government by the U.S. Congress and "inaccurate perception" of Turkey in Washington can only be curbed with a series of official meetings between parliamentarians and the help of Turkish-American communities said a senior member of the Turkish Parliament.

Bozkır, the chairman of the commission on Foreign Affairs in the Parliament, had the opportunity to meet 17 members of congress and share views on a range of issues including Turkey-Israel settlement and Cyprus reunification in a two day visit to the U.S. capital.

"My colleagues are aware of the significance of Turkey in the Middle East and they are expecting to see a more democratic, modern and prosperous Turkey in coming years," Bozkır said. "They are closely following the developments in Turkey. However there is still an inaccurate perception within the political elite of D.C. I think to solve these differences we must focus on more dialogue between members of parliaments. Another valuable asset for us is our new ambassador to United States. He will also take care of this matter."

Serdar Kılıç, Turkey's new ambassador to D.C., and former secretary general of the Turkish National Council, yesterday submitted his credentials to President Barack Obama. Kılıç needs to tackle urgent problems on the desk such as draft Armenian Genocide Bill No 401 that is expected to be brought to Senate floor in this June.

Bozkır, who is also a former ambassador and a career diplomat, stated, "I have emphasized that this bill has already created disappointment in Turkey after passing through the Committee on Foreign Affairs. I have recommended to my counterparts that blocking this bill is very important for us and even with a Senator's willing it would be possible.

"Both Prime Minister Tayyip Erdoğan's historic condolences to descendants of Armenian Ottomans and ongoing efforts to finalize Turkey-Israel settlements have received good reactions from congress and will further help to repair Turkey's image in the U.S."

According to Bozkır, congress seems more interested in recent escalation in Ukraine and Russia's growing influence in the region rather than Turkish domestic politics and demanded wider Turkish support for western bloc concerning the issues.

Another important topic that members of congress have been supportive of is the Cyprus negotiations. In response to a question on the U.S.'s role in Cyprus reunifications, Bozkır said that the Obama administration showed substantial efforts to resolve the issue whereas the EU had failed to succeed.

"Everyone is over here supporting the reunification of the Island," Bozkır said. "People are happy to see the progress and I think American will push the Greek administration to approve a referendum for the future of the island next September."
Last Update: May 22, 2014 3:56 pm