US vice president in Cyprus to provide boost for unity talks 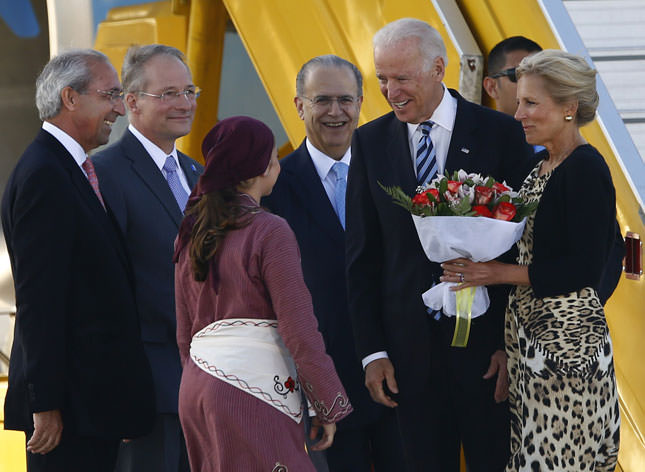 U.S. Vice President Biden's visit to Cyprus, could allow both sides on the island to reach a solution that has proven elusive since 1974

ANKARA — U.S. Vice President Joe Biden and his delegation was scheduled to arrive on the divided island of Cyprus late yesterday, where meetings are scheduled to be held today on both sides of the island. Joe Biden's visit marks Washington's highestlevel visit to the island in 52 years. The vice president will meet with political leaders from the Turkish and Greek Cypriot communities, civil society representatives and religious leaders. His visit is seen by many as an indication of the closeness of a possible peaceful resolution of the conflict on the island. Regarding the visit the White House recently stated that Biden will emphasize the U.S.' strong support for a comprehensive settlement to reunify the island as a bizonal, bicommunal federation with political equality. Moreover, Biden is also expected to call on all parties on the island to intensify their work to promote peace and security in the region.

Turkish officials also welcomed Biden's visit. Deputy Prime Minister Beşir Atalay who is in charge of the relations with the Turkish Republic of Northern Cyprus (KKTC) praised the U.S.' active stance toward the resolution of the Cyprus issue and stated that "We consider it extremely positive."

"This time, negotiations have been working out productively. Frankly, we consider efforts by both the EU and the U.S. useful on that issue," Atalay added. In addition Turkish Foreign Minister Ahmet Davutoğlu called Biden's visit a remarkable and positive step in terms of encouraging the negotiation process and bilateral talks, creating [a lot of] momentum toward reaching a resolution. "It is time to end the half-a-century- old conflict," Davutoğlu added in a recent press meeting with KKTC President Derviş Eroğlu last weekend.

Turkish and Greek Cypriots signed a joint declaration last February after two years of setbacks. Both sides expressed their determination to resume settlement talks. Later on negotiators from both communities made productive crossvisits to Ankara and to Athens. Moreover, the two sides have begun the second more substantive phase of negotiations and Turkish Cypriot President Derviş Eroğlu and Greek Cypriot leader Nicos Anastasiades expressed on several occasions their determination to conclude the peace talks. Derviş Eroğlu last month said he believed ironing out a settlement to the island's four decades of division with his Greek-Cypriot counterpart was possible within the year.

Greek Cypriot media outlets reported that during the visit Biden will reportedly announce the financing of a master plan for the Famagusta area, including the fenced-off Varosha (Maraş) to which access would be given to the experts drafting the master plan. There would also be the demining of three minefields. Greek Cypriot media outlets further claimed that both sides of the island reportedly agreed to the U.S. proposal although there are still some procedural details to sort out. However U.S. officials denied the allegations. "We're not coming to impose solutions or to pressure the two sides. This is about hearing Cypriot ideas for what a solution could look like. The vice president will offer continued U.S. assistance as long as the sides find it useful," a senior White House official said regarding the visit.

According to sources from the White House, energy and regional security issues will be on top of the Biden's agenda. Greek Cyprus has been suffering with economic crises for years and they had to bailout in March 2013. The bailout from the troika has continued to take its toll, and the Greek Cypriot government is continuing to take steps to raise to the challenges that it is presented. Meanwhile, recent discovery of the natural gas at the off the coast can benefit both sides of the island. But, the exploitation of recently discovered hydrocarbons in the island requires regional stability and therefore cooperation and mutually beneficial partnership is becoming important for the both sides of the island. Turkish officials believe the recent discovery hydrocarbon deposits are an asset which can bring peace to the island. They highlight that all energy resources around the island or on the island belong to both communities and neither of these communities can claim sovereignty over these natural resources.

According to diplomatic sources, after Biden's visit, U.S. Secretary of State John Kerry is also expected to visit the island in the coming weeks. Thus recent remarks of Kerry also can be considered as another sign that the U.S. gives great importance to the success of reconciliation talks between the two parties. "We want to try to be helpful in this process. There are exciting things happening and we respect and appreciate Cyprus' efforts to work on a number of different fronts," Kerry remarked in a meeting with Greek Cypriot Foreign Minister Ioannis Kasoulides last week in D.C.

The island of Cyprus has been divided since 1974 when Turkey exercised its constitutional right as a guarantor by conducting a military operation following a coup by far-right Greek Cypriot extremist group, the National Organization of Cypriot Struggle (EOKA).
Last Update: May 22, 2014 5:37 am
RELATED TOPICS