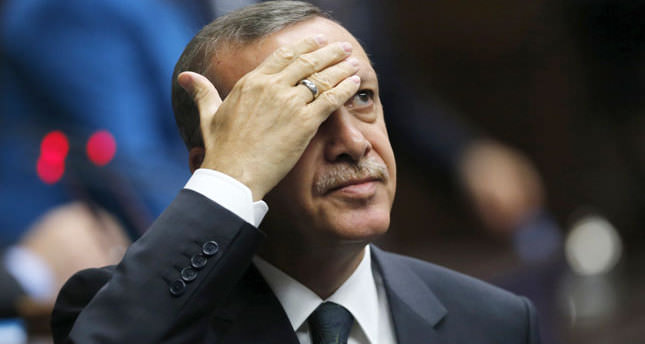 Despite PKK's provocative activities in Turkey's southeast, the government is determined to carry out the peace process as officials organize regular meetings to evaluate progress on the reconciliation

ANKARA — In recent weeks, members of the outlawed PKK have increased activities and attacked a military outpost and wounded two soldiers in eastern Turkey. This incident was a rare outbreak of violence since March 2013 when imprisoned PKK leader Abdullah Öcalan declared a ceasefire as part of a reconciliation process with Turkey. Later on, we witnessed several high-level meetings while some people expressed their concerns about the future of the process. Prime Minister Recep Tayyip Erdoğan met with members of the cabinet, top officials from the AK Party and intelligence organization to evaluate the ongoing
peace process late Monday.

Sources from the prime ministry called the meeting "regular" and avoided commenting on its contents, but it is believed that the evaluation of the peace process was the topic of the meeting. Thereafter, on Tuesday, Deputy Prime Minister Beşir Atalay, Justice Minister Bekir Bozdağ and Interior Minister Efkan Ala met with a delegation from the pro-Kurdish People's Democratic Party (HDP), which included Pervin Buldan, İdris Balüken and Sırrı Süreyya Önder. Regarding the meeting, Atalay said it was "ordinary" and added that "everything is proceeding on its normal course; there is no failure or setback in the reconciliation process.
Our government is determined to go ahead with it."

On the other hand, HDP deputy Sırrı Süreyya Önder stated that his party had held an important meeting with government officials about the settlement process. "We have shared our impressions from earlier meetings with Öcalan and KCK officials and ordinary citizens about the peace process."

Following this meeting, Kurdish deputies and governments officials confirmed that the peace process remains on track without problems. In addition, Murat Karayılan, head of the armed wing of the outlawed PKK, stated that they have no regrets over the peace process.

"We have no regrets over the year since this process was initiated. Above all else, the whole world has seen that we really want a solution achieved through politics and dialogue. We are not pro-war, we are pro-peace," Karayılan remarked in an article published in the PKK's monthly publication Serxwebun magazine.

Hence all of these remarks show that the current peace process is continuing despite challenges. Yunus Akbaba, a political analyst with the Ankara-based SETA Foundation, share same thought, "It can easily be argued that Turkey completed the orientation period in terms of Kurdish issue in both political and societal level. The peace process does not continue just because of the determination of political actors but also the push of public will." Political analyst also drew attention to high public support behind the process. "Recent polls reveals that the support for the peace process is pegged to 70 percent. In this regard, the political actors are very aware of the fact that the one who leaves the table pay the political price. Therefore, seemingly stalled process proceeds from the general political agenda. The process has gained a constructive role and it will continue with new developments," Akbaba remarked.

Besides, the recent protest of a group of Kurdish families in the south-eastern province of Diyarbakır to protest the recruitment of their children by the PKK also can be shown as an example of public support that backs the process. Whereas Diyarbakır Deputy Galip Ensaroğlu underlines that government is determination to continue peace process and to solve the Kurdish issue. "I am glad to mention that the entire legal barrier against Kurdish language and the Kurdish identity have been removed by our government. These barriers were the main cause for the Kurdish issue." Ensaroğlu noted that hundreds of KCK prisoners were released in the last month in virtue of abolishment of the special mandate courts and legal changes that reduced the long detention period. Deputy Ensaroğlu also added that Ministry of Justice is currently working on a new regulation to enable release of sick prisoners.

On the other hand according to sources from Prime Ministry Interior Minister Efkan Ala and Justice Minister Bekir Bozdağ currently working on a new package that aims to strengthen ongoing peace process, however, the sources avoid to comment on details and timing of the new package. According to Yunus Akbaba apart from general political atmosphere, a revitalization of the process is needed for the democratic solution to Kurdish issue. "It can only be meaningful if it is premised on legal and solid steps rather than discourse. The right to educate their children in their mother tongue, providing room for Öcalan in order to maneuver, that is to enable him to see journalists and his lawyers, and amendments to the disreputable Counterterrorism Law (TMK) are main issues that Kurds cherish their hopes," Akbaba remarked.