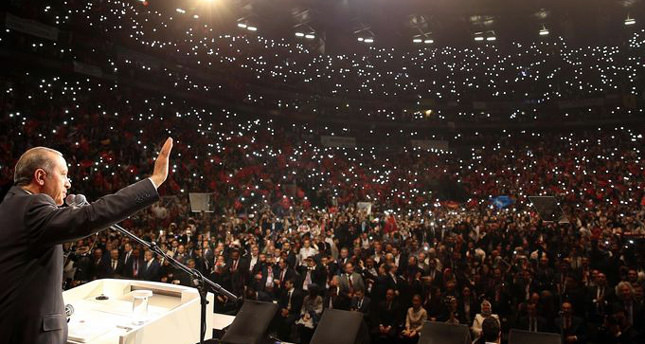 by AA May 25, 2014 12:00 am
COLOGNE, Germany — Turkish Prime Minister Recep Tayyip Erdoğan called Saturday on Turks in Europe to integrate into the societies in which they live. He rejected, however, the idea of "assimilation" as he addressed the 10th anniversary of the founding of the Union of European Turkish Democrats, a Cologne-based lobbying group.

In pictures: Erdoğan in Germany

"We have been missing you for the years you have been missing us away from your motherland," Erdoğan said. "I pay you my gratitude on behalf of my nation for your labor, patience and wisdom. We are proud of you as a nation."

"The alliance of some media organizations and foreign forces was meaningful after the Soma coal mine disaster in western Turkey," the prime minister said. "Foreign leaders should recognize the democratic will of our people and congratulate us, as we do after their elections."

"Why are none of the European countries condemning the Egyptian death sentences, and why they cannot call a coup a coup?" asked Erdoğan.

Turkey is a part of Europe

Erdoğan stated that Turkey was an integral part of Europe and racist attacks in Europe would be curbed with the participation of Turkey in the European Union.

"European political problems will not be solved by using Turkey, but by including Turkey," Erdoğan said.
The prime minister praised the contributions of the expatriates in Germany.

"The gross worth of the Turkish entrepreneurs in Germany is €40 billion," he said. "They have 400,000 jobs and Turkey's trade volume with Germany has reached $30 billion."

"Four million German tourists visit Turkey every year and a number of Germans have settled in Turkey," he said. "We will work together for the wellbeing of Turkey, Germany and other European countries"

Erdoğan said he was grateful for the condolences of expatriates for the victims of the Soma coal mine disaster in western Turkey on May 13, in which 301 workers were killed.

Erdoğan accused what he called "illegal" groups, including opposition lawmakers, of "trying to gain political mileage" from the disaster

PM Erdoğan criticized some German media outlets for carrying out "black propaganda" against him and his government following the tragedy in Soma. "Unfortunately, some media outlets here are using insults against the prime minister of Turkey in order to exploit the Soma tragedy," he said.

Referring to different protesting groups outside the arena Erdoğan said, "The protesters outside are also our brothers. We will leave here with grace and dignity, without being provoked and will preserve our fraternity at any cost."

Several non-governmental organizations and political groups had registered to hold counter-demonstrations Saturday in Cologne.
The European Federation of Alevi Communities, which has been critical of the Erdoğan government's policies, held a mass rally in

The anti-immigrant pro North Rhine Westphalia party organized a protest at Deutz Train Station, about 400 meters from the Lanxess Arena.