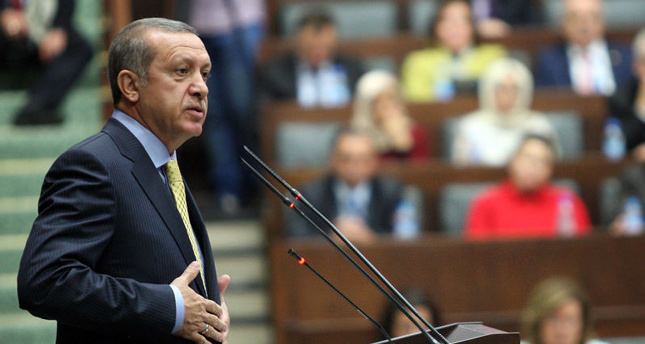 ISTANBUL — Prime Minister Recep Tayyip Erdoğan received support from prominent Alevis after his latest AK Party Group Meeting speech at the Turkish Grand National Assembly (TBMM) which promised greater recognition for the minority group. The speech drew praise from Alevi figures including Ali İhsan Şahin, a legal expert and the president of the Universal Alevi Bektashi Association after condemning rival parties for not doing more to help the minority while claiming that increased recognition of Alevis serves only to make everybody stronger. "Perpetrators are now trying to bring differences to the surface between religious sects to create unrest in the country" said the prime minister, who expressed this was even evident in Germany where Alevi groups allegedly gathered in five different places to protest his speech addressing over 10,000 Turkish citizens living in Germany.

Protests failed thanks to the precautionary measures taken by the German government.

The prime minister condemned his rival Republican People's Party's previous policies towards Alevis, referring to the Dersim Rebellion, a pro-Kurdish uprising organized in 1937 by Seyid Rıza, who was an Alevi chieftain of a tribe located in eastern Turkey, resulting in the killing of hundreds of Alevi citizens, while thousands were forced into exile.

"The Republican People Party (CHP) has never criticized this tragedy" said Erdoğan, who noted Kemal Kılıçdaroğlu, the party's leader himself is from Dersim but never talked about Dersim because the CHP were behind the killings. He also criticized the CHP for allowing some of its deputies to provoke Alevi citizens into violent acts in the Reyhanlı attack, in Hatay, Malatya, Adıyaman, Gezi Park incidents as well as the May 1 Labor Day celebrations.

Panning those who support the illegal armed uprising which recently took place in Okmeydanı, Istanbul this week, Erdoğan said that people are seriously disturbed after the sister of Uğur Kurt, who was killed at the yard of a cemevi during the clashes, has opposed those who wanted to protest the government at Kurt's funeral, saying "If you did not carry out these protests my brother would not have died."

Highlighting the fact that for almost a century there was a false perception in Turkey that if people spoke any language other than Turkish it would "divide and break the country into pieces" in efforts to intimidate people, Erdoğan claimed the current government has lifted such obstacles and allowed differences to flourish, which have not divided the country but have actually strengthened it.

More importantly, Erdoğan explained the incidents in Okmeydanı were organized by terrorist organizations which are openly supported by foreign actors. For instance, he stated the DHKP-C (Revolutionary People's Liberation Party-Front), recognized as a terrorist organization by the U.S., EU and the U.K. is trained in Greece but the Greek government and has recently attempted to halt their operations here.

The prime minister claimed the organization has no interest in the issues faced by Alevi citizens and he called on the CHP to distance themselves from the DHKP-C and stop supporting them.

Erdoğan blamed the CHP for exploiting the feelings of Alevis, provoking them, creating false scenarios of conflict and for failing to express their apologies for the Dersim incident. In contrast, Erdoğan claimed the AK Party has taken steps towards reforms that will mend fences between groups in Turkey while adding that the government is planning to continue their reforms and address the needs and demands of Alevis.

"Clashing with police forces, breaking windows and glass or causing the death of innocent civilians including children will not resolve anything" said Erdoğan, who claimed those calling people to arm themselves and attack do not think about the interests of the Turkish nation nor its Alevi citizens.

The Prime Minister has expressed his condolences for those who were recently killed in the incidents and stated they will not tolerate the killing of more people and expressed his hope for a better and more peaceful future which will be possible with the cooperation of the nation.

In response to the prime minister's speech, Ali İhsan Şahin who is a lawyer and the president of the Universal Alevi Bektaşi Association has expressed his appreciation and noted it was a constructive speech.

"I believe the Alevis will respond positively to this" said Şahin, who stated Alevis do not have any issues with the government or the prime minister and explained there were a number of alleged Alevis with bad intentions such as those who are appointed to Marxist-terrorist organizations who try to create unrest.

"Such people put Alevi-Bektaşi designations in their organizational names and exploit religious sentiment as they are not faithful or practicing Alevis, most of them are Atheists and know nothing about the religion" said Şahin, who claimed mainstream and genuine Alevis are faithful to their state and will welcome the prime minister's remarks while provacators may attempt to oppose reconciliation attempts. Şahin demanded that everyone pay close attention to this fact and not to let perpetrators stop the new era of reforms which can significantly improve the rights of Alevis and address their demands.
Last Update: May 30, 2014 12:01 pm
RELATED TOPICS