14 localities to re-vote in Turkey today 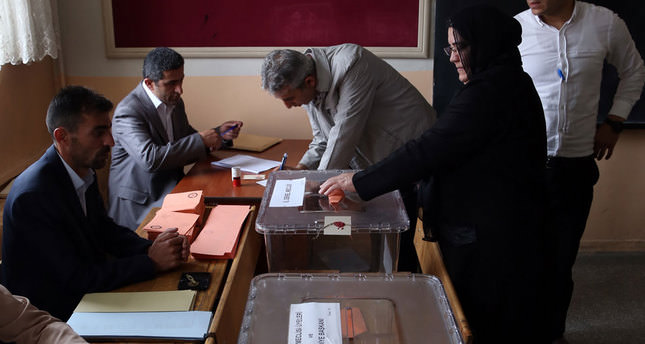 by AA Jun 01, 2014 12:00 am
ANKARA — Turkish citizens in 14 localities began casting their votes on Sunday for local elections.

The Supreme Election Board had declared 13 results void in the March 30 local elections including northwestern Yalova and eastern Ağrı provinces, due to irregularities, and also decided holding by-elections in Gömü district.

Results of Yalova and Ağrı provinces in March 30 local elections were highly disputed, and appealed several times both by ruling AK Party and opposition parties.

Nearly 203,000 Turkish citizens will vote on Sunday to choose their local leaders for the next five years.

Voting started in the eastern Ağrı province as a total of 79,498 people are eligible to cast their votes in 310 ballot boxes across the province.

In northwestern Yalova province, 245 ballot boxes have been made available for 75,813 voters until 5 pm.

Voting will also take place in the Aydıntepe district of northern Bayburt province, in the town of Tercan in the eastern Erzincan province, in Şabanözü district of Çankırı in central Anatolia, and in the Buharkent district of Aydın in the Aegean region.