Opposition candidate will be apolitical, standing neither for CHP nor MHP 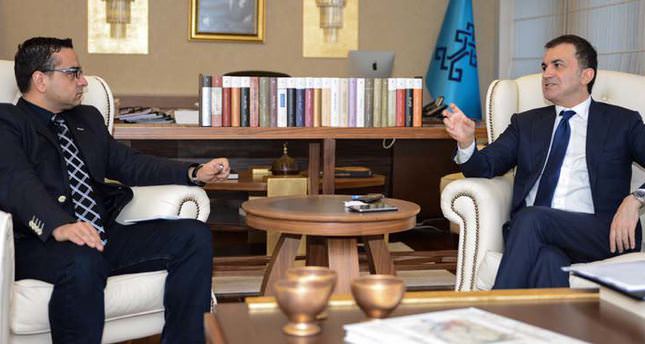 In an interview with Daily Sabah, Culture and Tourism Minister Ömer Çelik explained how Turkish government efforts to provide better conditions for culture and art facilities and remarked on the upcoming presidential elections

Turkish film director Nuri Bilge Ceylan's "Winter Sleep" won the Palme d'Or this year at the Cannes Film Festival. Minister of Culture and Tourism Ömer Çelik has received as much praise as Ceylan for the support the ministry has given to the project. Years before taking up the position as minister, Çelik served as the deputy foreign relations chairman of the AK Party. We spoke with him on a range of matters from the EU parliamentary elections to the peace process with the Kurds and the presidential election.

Prior to taking up the position as minister, you served for years as the AK Party's deputy chairman for foreign relations. How do you evaluate the EU parliamentary elections held last week? The picture that has emerged from the EU parliamentary elections reveals how cultural dimensions are as important as political dimensions. The rise of the extreme right, racism and Islamophobia in Europe, racism and Islamophobia is happening though two pathways; racism in politics reveals itself as being anti-foreigner.

A reason for this is while measures to combat the financial crisis that rocked Europe were taken, there was a complete disregard for the social aspect of the crisis.

The EU Parliament defines the future of the continent. The low turnout for the elections will pave the way for the rise of the extreme right and radicalization while preventing policies from being produced.

The EU for years has been held up as an example of civilization. For an institution built on plurality and inclusiveness, the rise of the extreme right indicates the EU ought to review its expansion policies as well as its messaging. These results may not seem particularly threatening right now, but if center-right and center-left parties throughout Europe deal with the rise by merely upping their own ante rather than providing solutions, the problem will only manifest further.

In this context, how do you evaluate EU-Turkey relations? The anti-immigration and Islamophobia debate within Europe that is sometimes waged over Turkey is in fact a debate where Europe needs to face up to itself.

The EU is an institution of principals. If the EU maintains its border with that of the European continent then it will have surrendered to extremism. Therefore it is important that the EU continues its expansion policy outside of the boundaries of the European continent. The lack of reaction from center-right and center left-parties toward the anti-foreigner and anti-Turkish sentiment will backfire and create a political threat for them.

The peace process with the Kurds has been ongoing for the better part of two years. An important element of this process has been cultural rights. Can you give details on the latest developments there? The AK Party government has produced policies to combat Turkey's most chronic problems. The peace process is one of these. Unfortunately, in the past, the state denied the cultural rights of its citizens and applied assimilation policies.

A nation-state mentality meant that the state tried to create a homogenous society. Turkey is different to other nation-states in this regard, having tried to impose the nation from the top down.

The peace process rests on a fundamental principal that citizens of the Republic of Turkey must not be subject to exclusion due to cultural, ethnic and religious differences. Many reforms to ensure this have been undertaken and are continuing.

Democratization is not a short-term project that can be implemented from the top down. It is a long process that involves society as a whole. For example, a short while ago the Turkish Language Board published a Kurdish-Turkish dictionary. The Culture Ministry, for the first time, commissioned a translation of a Kurdish piece. Kurdish poet and songwriter Ahmed-i Hani's work "Mem-u Zin" will be published in Turkish. These examples show that all government structures are doing their part for the peace process.

Are there new steps underway for the cultural rights of Alevis? Just as with the peace process, improving the cultural rights of our Alevi citizens is of great importance to our ministry and our government. For years, the Alevis were among the most persecuted segments of society with restricted cultural rights. We are coordinating with Alevi civil society representatives to fulfill their requests regarding identity and other matters. We have projects underway to expand the audiences of works produced by Alevi artists.

In the past months we have initiated a project for Alevi and Bektashi leaders to visit holy sites in Iraq and Saudi Arabia. This project has been well received and we hope to institutionalize this "fusion project."

The other candidate will not be a CHP [Republican People's Party] or MHP [Nationalist Movement Party] candidate per se but rather an "apolitical" candidate. Throughout the Republic's history, until the presidency of Abdullah Gül, the presidency was always a custodian institution and an intermediate layer to separate state and politics. The prevailing mentality that politics always makes mistakes therefore either the military or civil service ought to govern the state always kept the public out of the picture out of fear. The CHP and MHP are products of this custodian model and their efforts to find a joint candidate show they want to continue this model. The purpose of political parties is to strengthen politics.

However, these two political parties are arguing that the president ought not to be a political person and thus are trying to render politics ineffective.

Despite all these factors, the public has become an indisputable element of how the country is governed. The efforts to revive the custodian system will result in both political parties paying a heavy price. We will see on Aug. 11 how Turkey will overcome these debates and crises.

Nuri Bilge Ceylan's Palme d'Orwinning film "Winter Sleep" received the most financial support from the Ministry of Culture and Tourism to date. What are your thoughts on this? In today's world, cinema is an important component of a country's soft power. It is also an important vehicle with which a country narrates its own stories to the world. In contrast to globalization, localization has strengthened cinema outside of Hollywood.

Thus, unique stories need to be told in line with global standards. Nuri Bilge Ceylan is a director who is able to do this and a source of pride for us. I would like to congratulate him again.

Our ministry views cinema as a key strategic field and we give special importance to this form of art. I would like to emphasize that during the AK Party's governments we have seen a marked rise in support for cinema and other cultural activities.

In 2013, 50 million cinema tickets were sold throughout Turkey. While only 75 local films were shown between the years 2000 and 2005, this number increased to 417 during 2005 to 2013. Of the 417 local films, our ministry supported 68 of these projects and in total has won approximately 400 awards internationally. These figures reveal both our ministry's support of the cinema sector but also the awards show our ministry's ability to identify appropriate projects to fund. Our aim is to reach 100 million viewers annually and to provide the necessary support for 100 local films to be made.

There have been reports of archaeological findings during the construction of the third bridge in Istanbul. Can you give us an update on the latest developments? When large-scale infrastructure projects are underway, all ministries work in coordination with one another. For example, whenever the Energy Ministry wants to lay down new pipelines, discussions regarding premises [take place] with the Culture and Tourism Ministry. The earmarked area can be changed to protect historic and cultural sites. A similar situation arose during the construction of Marmaray [an undersea rail tunnel in Istanbul]. To protect the artifacts uncovered during the construction, a large-scale excavation was started and the project's area was changed.

There is work being undertaken by the ministry for the protection of the site of the Çanakkale wars on the Gallipoli Peninsula. However, the completion of the work will mean the end of the Anzac memorial service held at dawn and there have been reports in other newspapers of a ban on alcohol on the peninsula. Can you comment on these issues? The Çanakkale wars are an important part of our history. Our country came face to face with a large invading force at Çanakkale and we were able to turn this into a project of peace. During our terms in power, preservation of the historic fabric of Çanakkale has been undertaken with the completion of the statue, restoration of the bastion and recovering areas. Now the spirit of Çanakkale will be revived; with a directive from our prime minister, a mechanism will be established. The Gelibolu Peninsula will be made into an open-air museum. A body that will be linked to our ministry will coordinate all commemoration ceremonies, national and otherwise.

There are no plans to implement a special law regarding consumption of alcohol on the peninsula outside of the current laws. There is absolutely no discussion of banning the dawn commemoration service.

In fact, on the contrary; our country is doing its utmost for such services to be held. A short time ago, meetings were held with the Australian and New Zealand Veteran Affairs Ministries on how to improve the ceremonies and coordination. They expressed their gratitude for our interest and dedication.

Unfortunately, some of the areas of the palace have been misused, certain parts have been used as depots and fallen into disrepair. We want to return Topkapı Palace to its former original glory. Furthermore, we have improved the displays of inscription pieces within the museum so that they remain better preserved. When the work is completed the palace's cavalry units will be present. For centuries Topkapı served as the seat of the Ottoman Empire and we are working hard to preserve and present the palace in an appropriate and comprehensive manner. One of the complaints we receive regarding the museum is the high volume of visitors. We are currently working on a rendezvous system for visitors.
RELATED TOPICS