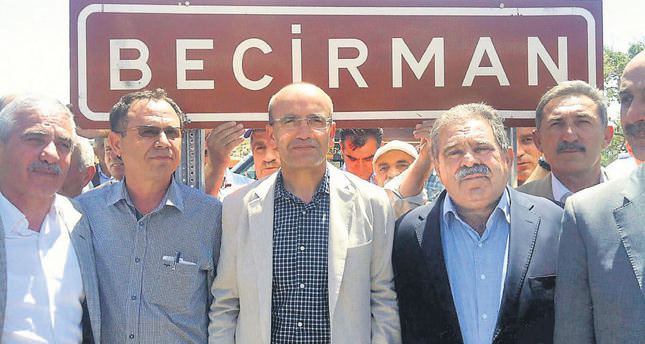 by Ali Ünal Jun 03, 2014 12:00 am
ANKARA — In recent weeks, the Turkish cabinet held several meetings to evaluate the current status of the Kurdish reconciliation process, which began in January 2013, and assess the government's roadmap to energize talks with the PKK leadership. Commenting on the focus of their meetings, Deputy Prime Minister Beşir Atalay stated that the government has plans to take bold steps in order to expedite the process. "All aspects of the matter are currently on the table and we took measures to give new momentum [to the process]," Atalay remarked, without providing additional details about the proposed steps.

Senior government officials who commented on the proposed reforms on condition of anonymity, however, suggested that the government's reform initiative will concentrate on several areas including the lifting of Turkey's reservations on the European Charter of Local Self-Government in an attempt to address the Kurdish population's demands.

The charter, which the Council of Europe adopted in 1985, introduces safeguards against interference in local governments, many of whom remain subject to Turkey's reservations.

In recent years, however, the country adopted a number of legal reforms regarding local government to render its original reservations increasingly insignificant.

The sources claim that Ankara is also considering introducing new laws to facilitate the return and reintegration of PKK militants with no proven involvement in criminal activities and violent acts. The authorities, however, have reportedly been observing the latest developments in the country's predominantly Kurdish southeast region and the PKK's activities on the ground.

In recent weeks, the province of Diyarbakır set the stage for anti-PKK protests led by a group of Kurdish women who assembled in front of the municipal building to demand that the terrorist organization return their children, whom they claim were kidnapped and forcibly recruited. Against the backdrop of the controversy surrounding the missing children, Prime Minister Recep Tayyip Erdoğan announced that the PKK had kidnapped up to 134 children in recent months.

While coercing children into joining the militants represents one of the PKK's traditional recruitment strategies, the women's protest took place for the first time since the reconciliation process began roughly 18 months ago.

According to the Human Rights Commission of the Turkish Parliament, the PKK's active military force included approximately 6,000 fighters in 2012, 43.68 percent of whom were under the age of 18. The PKK, however, dismissed the allegations as government propaganda and argued that the Turkish authorities exploited the families to discredit the organization. "The PKK will not use minors for war," a written statement published on ANF news agency indicated. Meanwhile, sources in the Turkish capital maintain that the government would take the PKK's cooperation in releasing the children as a token of goodwill, which would in turn speed up additional reform initiatives.

The government reportedly also plans to reform the country's gendarmerie corps. Reform of the gendarmerie was voiced by the EU in last year's progress report. Under the reform plan, the legal status of the Gendarmerie General Command will be equal to that of the National Police Department. Both departments will be part of the Domestic Security Undersecretariat, a new unit that will be solely responsible for coordinating security units in fighting terrorism. The reformed gendarmerie will be based on the French and Italian models. Under the reform plan, the country's prisons and jails will be taken out of the jurisdiction of the gendarmerie command.

Instead, it will be restructured to have significant responsibility in securing Turkey's borders.

Recent efforts and the government's determination to revitalize the reconciliation process also received praise from Abdullah Öcalan, the PKK's founder who is currently serving a life sentence on the island of İmralı.

During a recent visit by the Peoples' Democratic Party (HDP), Öcalan stated that the peace process had entered a new stage and called upon the organization to remain vigilant about any attempts to derail talks. "In the previous state of affairs, there was hope for a new, serious beginning. This hope must be protected and enhanced," Öcalan was quoted as saying in a written statement released by the HDP headquarters.

The reconciliation process started in early 2013 and has continued largely successful thus far. The government official referred to the process the government's most important project and stated that it has been carried out with sincerity.
Last Update: Jun 03, 2014 1:17 am
RELATED TOPICS