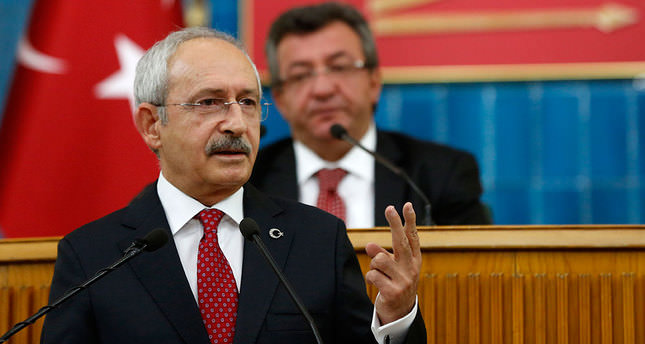 by AA Jun 03, 2014 12:00 am
ANKARA — The leader of Turkey's main opposition Republican People's Party (CHP) called on people to "strive against a dictator," referring to Prime Minister Recep Tayyip Erdoğan at his party group meeting on Tuesday.

Kemal Kılıçdaroğlu said that if a politician wishes to govern the country, then he must always tell the truth regardless of the circumstances. However, he said that dictators have two main characteristics -- being a "coward" and a "liar," adding that a liar can neither be a prime minister nor a president.

Addressing the anniversary of Gezi Park, Kılıçdaroğlu said that history changed in Turkey during the Gezi Park protests and emphasized that the youth are "our future and hope."

"They (protesters) resisted against oppression and cruelty. The protests disturbed the dictator," said Kılıçdaroğlu.

The Gezi Park protests began as a small environmental demonstration on May 31, 2013, and mushroomed into nationwide anti-government demonstrations. The protests erupted in May after the government moved to implement a redevelopment plan for nearby Taksim Square which reportedly included replacing part of Gezi Park with a mall.

"Our security forces have clear orders. What is necessary will be done from A to Z," he added.