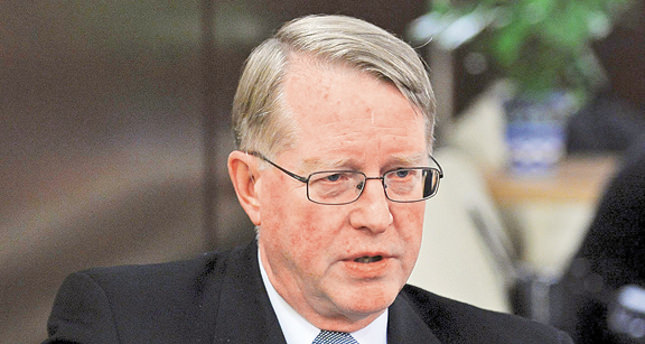 by Ragıp Soylu Jun 04, 2014 12:00 am
WASHINGTON, D.C. — To the surprise of many, James Holmes, retired U.S. Ambassador to Turkey and president of the American-Turkish Council (ATC) announced his resignation at the 33rd Annual Conference on U.S.-Turkey Relations.

Holmes was recently criticized by columnists Ali Bayramoğlu and Etyen Mahçupyan at a meeting organized by the Foundation for Political, Economic and Social Research (SETA) in Washington, D.C. when he responded to a question about Turkey's democratic ranking by stating that on the one hand Turkey was democratizing but on the other hand moving away from democracy due to Prime Minister Recep Tayyip Erdoğan.

Adding to the tension, Holmes claimed that his unexpected resignation was due to the Turkish government's attitude toward him and alleged that there has been a defamation campaign against him. In a recent statement, the Turkish Embassy in Washington stated that such claims did not represent the truth.

Spokesperson for the embassy Aydan Karamanoğlu noted that the ATC has been a corporation-based organization for 33 years and there may have been disagreements about some issues but the claims that he was pressured to quit are out of question. Karamanoğlu also refuted statements by journalists who claimed that the participation of Turkish officials has fallen significantly this year. He stated that it was unreasonable to expect high levels of participation from ministers at a time when the presidential election is the main item on the government's agenda. He also noted that undersecretaries from the Ministry of Defense and the General Staff attended the conference.

The ATC's 33rd annual conference was attended by numerous U.S. officials. The council is known to be the main Turkish lobby in the U.S.
Last Update: Jun 07, 2014 7:58 pm
RELATED TOPICS