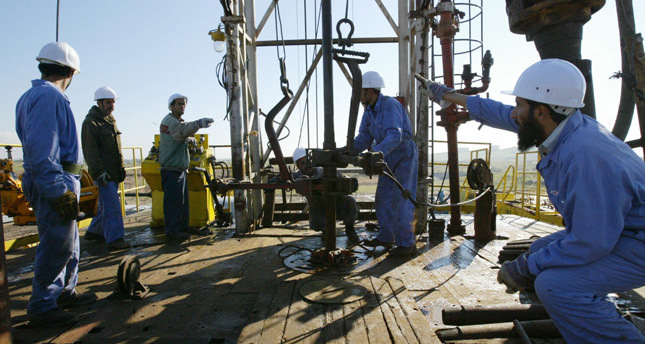 by Ali Ünal Jun 06, 2014 12:00 am
CEYHAN — Despite the fact that contradictory information has been reported regarding the first shipment of crude oil from the Kurdistan Regional Government (KRG) via Ceyhan Port, officials from the Turkish Ministry of Energy confirmed that KRG oil is being sold on the world market and the second crude oil tanker has also departed from Ceyhan. "The first tanker loaded with KRG oil was sold to the world market and more vessels will be loaded at Ceyhan," a senior official at the Turkish Ministry of Energy announced. "As Turkey our stance is the same. In this regard we believe that this oil belongs to Iraq and therefore we were not involved in the sale, however, according to information provided to us, the first shipment of crude oil which departed from Ceyhan last week has already been sold and we will continue to export the oil transparently," the Turkish official added.

In line with Turkish officials, KRG officials announced that the tanker arrived at its final destination, "The tanker [carrying Kurdish oil] has reached its destination," said KRG Spokesman Safeen Dizayee. He emphasized that the price of Kurdish oil exported abroad has not been lowered. We are insisting on exporting oil, and it is sold according to market price and quality," he added.

The Marshall Islands-registered tanker United Leadership carrying more than 1 million barrels of KRG oil departed from the Turkish port of Ceyhan on May 23 and has been anchored outside of the port of the Moroccan coastal city of Mohammedia since Tuesday morning. The port is the delivery point for the Samir Mohammedia refinery. In an effort to look into allegations that oil from the KRG was bought by the Samir refinery and the vessel is unloading its shipment, Daily Sabah reached out to officials from the Samir refinery, however, they declined to comment on the topic.

Meanwhile, according to information obtained from the Ceyhan Oil Terminal Port, a second crude oil tanker loaded about 1 million barrels of oil from the KRG has already set sail.

A crude oil trader based in London who spoke Daily Sabah anonymously also confirmed that Kurdish oil was being sold. "The sale of first Kurdish crude is already done. I cannot identify name of buyer company but it's one of the big players in the market." Furthermore the oil trader affirmed that market players are ready to buy more oil from the KRG without any hesitation.

Regarding the sale of the KRG crude oil, Shwan Zulal from London-based Carduchi Consulting commented that hesitation in the market is temporary. "I think [saying] the world market is falling over themselves to buy Kurdish crude is a little premature but they certainly appear to have buyers and that is what matters for now. The world market will come later."

Zulal also added that he does not expect major obstacles for the forthcoming oil trade. "The obstacles are largely internal issues and Turkish relations with Iraq but that does not seem to matter that much given the first shipment has gone out and we all saw an ICC arbitration which Turkey has not taken much notice of. Companies or countries are cautious about Kurdish crude because they do not want to be dragged into an internal dispute in another country."
RELATED TOPICS