Religious Affairs had tough messages for everyone 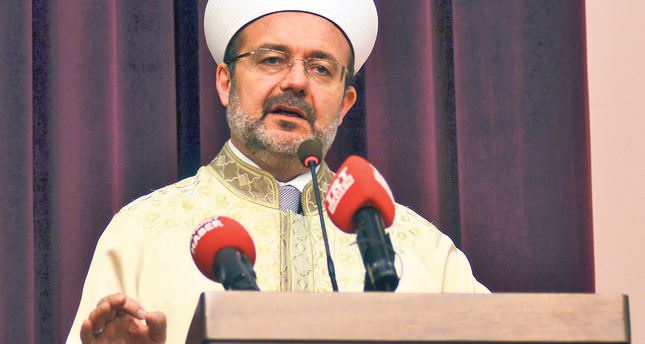 Religious Affairs head Mehmet Görmez, "Diyanet has warm feelings for those parties and politicians who have Islamic sensitivities but does not and cannot turn its back on those who do not."

Turkey's head of Religious Affairs (Diyanet) Professor Dr. Mehmet Görmez was in the headlines last week with a major opening speech at the Provincial Muftis meeting in Mardin. What is interesting is that the speech has messages for various sectors of society and political groups, but everyone seems to have preferred to pick the statements that were suitable for them and turn a blind eye to other messages.
Opposition media were jubilant, saying Görmez set a defiant tone against the government and that he targeted Prime Minister Recep Tayyip Erdogan directly when he criticized the handling of the Soma mine disaster that left 301 workers dead.

Those who are close to Görmez know well that Turkey's leading authority on religion is not against the policies and actions of the government, and to the contrary feels much affection for the prime minister. Thus at times, even at the cost of angering the prime minister, he does not hesitate to confidentially give some friendly advice to Mr. Erdogan.

However, Görmez knows first and foremost his mission is to uphold the good name of Islam and rejects anything to do with politics. His messages and warnings were clear and were directed against all parties concerned, yet we see that some people preferred not to hear some of them.

Görmez and the Diyanet community are set to preserve their identity of remaining apolitical, and thus in the speech, the head of Diyanet declared: "It is necessary that the area of religion is not only separate and independent from politics but that it is at a relatively higher standing. We are following with deep emotions the fact that certain political representatives accept religion in their daily lives or in their projects with an obvious attachment and that they are making an effort that it is effective in the daily life and social reality of the country. We also do not shy away from following those who hurt religious feelings and views in their political programs and their actions and desires to try to limit our area of existence, and we try to understand them. There is no way we will question the legality of these approaches. In fact, the basic principle of democracy can only be achieved by grasping this sensitivity properly."

Here the message is clear. He says Diyanet has warm feelings for those parties and politicians who have Islamic sensitivities but does not and cannot turn its back on those who do not. This is a clear attempt to set the record straight on where Diyanet stands on political issues. Görmez came under fire for being too close to the government by the opposition, while some people close to the government felt he was distancing himself from the administration.

Diyanet and Görmez say clearly, "We stand by what is right, and we oppose what is wrong."

On the Soma mine disaster he says: "When we assess such events from the perspective of Islam it is wrong to create alibis like this was the will of the divine force and thus try to escape from human faults and responsibilities, as much as it is wrong to regard the endless powers of the Creator as nonexistent. We have to stay away from theses and comments that cast a shadow on divine justice. We have to state that we do not stand by those who have grasped limitless worldly desires and try to add power to their power. We are distant to a religious notion that invites us to be a part of a system that does not take into consideration the toil and sweat of innocent and poor workers."

The opposition immediately grasped at this statement and claimed Görmez was lambasting the prime minister. Görmez was clearly targeting whoever is responsible for this manmade disaster and whoever exploited the workers. It is clear that the mine owners have disregarded human life and have not taken necessary measures to provide proper security conditions at the mine where so many lives were lost.

Görmez extended a big olive branch to Turkey's religious minorities when he declared: "We need legal solutions for all people who believe in a faith and who display different religious manifestations without making them a part of politics.

On the Alevis Görmez said: "Every believer who claims to be a Muslim will give an account of what he or she has done to Allah. This is a time to face realities and facts, and we are in a position to meet the basic measures and principles of Islam according to our religious abilities, values and principles. We cannot criticize anyone because of their religious preferences, and we cannot regard anyone outside of Islam as long as they regard themselves as Muslims."

So there was a message for everyone set in a rather diplomatic tone. Yet, people preferred to quote him out of context simply to advance their own political causes and try to find new ammunition to harm the prime minister. Görmez had tough warnings and criticisms for everyone including his own Diyanet.
Last Update: Jun 07, 2014 1:47 am
RELATED TOPICS