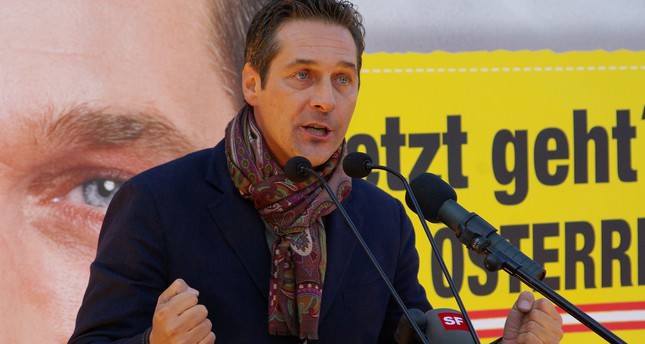 Prime Minister Recep Tayyip Erdoğan on June 19 and 20 as part of the presidential election campaign is planning to visit Austria where nearly 115,000 Turkish citizens reside, the largest minority group here, while racist sentiment is building in the country to protest his arrival.

Heinz-Christian Strache, leader of the Islamophobic farright Freedom Party (FPO), in an interview filled with racist sentiments, openly expressed his disapproval of Erdoğan's meeting in Austria and stated he was not welcome. "We also do not need Erdoğan in Vienna. I can tell him straight away: Erdoğan, stay home," Strache said, promising to "prevent Red-Green and Turkish road signs in Vienna" in the upcoming local elections when he will be running for mayor of Vienna. Noting Austria cannot ban Erdoğan's visit, Strache claimed that his visit was "a pure propaganda campaign for his Erdoganistan" and that Erdoğan wants to create a neo-Ottoman empire and "parallel societies in Vienna."

Strache and his party, the FPO, are known for their racist and anti-immigrant stance, evident by the party's controversial initiatives, including those claiming "Austria is not a country of immigration" and "the protection of cultural identity and social peace in Austria requires a stop to immigration," while the concept of Heimat (the homeland) makes up the main ideology of the FPO. Heimat has been widely promoted under the leadership of Starch, who also promoted Eurosceptic views and has strongly opposed Turkey's membership in the EU, and he said that if Turkey is accepted, Austria should leave the EU. Strache has been widely criticized for his racist remarks when in 2012 he compared immigrants to insects and consorts with neo-Nazis, while he claims women in Islamic dress are "female ninjas."
The prime minister previously visited Germany where he addressed around 20,000 supporters who will now be able to take part in the elections and cast their ballots for the first time.

Although his visit received criticism from radical right wing and neo-Nazi parties and groups along with a group of Turkish people, Erdoğan was welcomed by the German government and did not cancel his meeting.

As part of his presidential election campaign, Erdoğan is also expected to visit Lyon and Paris in France on June 20 and 21 according to information given by the Office of the Prime Minister. Accordingly, his agenda will include listening to issues faced by Turkish citizens living in Europe and explaining to them the vision of New Turkey, while receiving their insights about the upcoming presidential elections. On June 21 he will be meeting with François Hollande, the French president, to discuss reciprocal relations along with the EU accession process and the opening of new chapters, as well as cooperation initiatives between the two sides in terms of defense, energy and economy.
Last Update: Jun 10, 2014 7:12 pm
RELATED TOPICS