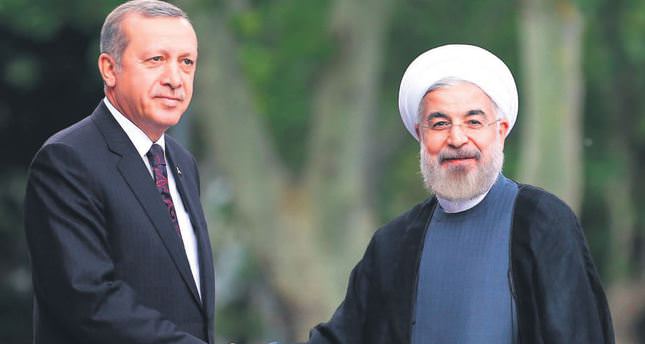 Energy, commerce and regional developments are at the center of discussions between Iranian leader Rouhani and Turkish officials, with many agreements set to be signed during the visit

ISTANBUL — Prime Minister Recep Tayyip Erdoğan and President Abdullah Gül met with Iranian President Hassan Rouhani yesterday, with discussions over the burgeoning energy ties expected to be at the top of the agenda. Rouhani, who will leave the country today, first met with Gül to discuss a range of regional developments which interest both countries before focusing on bilateral agreements expected to further deepen commercial ties. President Gül said during a press conference that Rouhani's visit should be seen as the beginning of a new period in terms of bilateral relations between Turkey and Iran. The twoday trip is the first by Rouhani since he assumed Office.

Gül and Rouhani discussed a range of regional and international issues, including energy relations, particularly in regards to oil, natural gas and electricity.

Amid ongoing disputes over various regional issues, Turkish and Iranian counterparts are expected to sign agreements regarding economic relations, politics, culture, transportation and security. Rouhani's visit is regarded as one of utmost importance to enhance cooperation and bilateral relations between the two countries which have long-standing historical and cultural relations despite bilateral ties having their ups and downs from time to time.

During the press conference, Rouhani expressed his appreciation for being invited to visit what he described as a neighbor and sister country. Rouhani said that Turkey has an important position among countries bordering Iran. Pointing out that the volume of trade between the two countries is currently about $15 billion (TL 31.24 billion), Rouhani stated that Turkey and Iran have decided to boost economic relations and increase trade volume to $30 billion.

Regarding efforts to boost economic cooperation, Gül said, "I believe that there will be more trade between our private sectors.
Enhancing bilateral relations between Turkey and Iran is not only important to these two countries but also important to regional stability and security. We [Gül and Rouhani] held effective talks to relieve the pain."

Rouhani stated that both countries are planning to take steps to improve their respective private sectors and added that they are aiming to cooperate more in the fields of science, technology and tourism. Rouhani stated that Iran has already requested that Turkish companies build hotels at popular tourist sites in Iran and demanded that Turkey ease restrictions on private companies which conduct banking in Iran.

Rouhani also announced that Turkey and Iran reached a transportation agreement which will link the two countries' railway system to each other. The Iranian president said that Turkey and Iran will use all measures to combat terror and extremism and ensure regional stability. Noting that none of the countries in the region can benefit from regional instability, he added, "That is why, Turkey and Iran want to cooperate on this issue. The fact that the Middle East needs to be cleaned of nuclear weapons is one that is accepted by the countries."
Gül touched on Iran's nuclear program and said that Turkey supports a diplomatic solution to the issue. "Our country's [Turkey] attitude is clearly open [on the nuclear issue].

We do not want any country having nuclear weapons in the region. On the other hand, we do not want any country to be deprived of the right of using nuclear energy for peaceful purposes. Using nuclear energy for other purposes is the right of us all [countries in the region]."
Gül added that Turkey's initiative to lift sanctions on Iran has been continuing and both countries will do their best to further bilateral relations.

When asked whether this visit should be regarded as the beginning of a new era in Turkey-Iran relations, Gül said, "Yes, because the president arrived to Turkey along with numerous ministers and businessmen. We [Turkey-Iran] decided that both countries have huge potential that can be used and we need to take action in this regard."

Exemplifying France and Germany's bilateral economic relations, Gül said the same investment and trade strategies can be put into practice between Turkey and Iran and added that the policies that Iran has followed since Rouhani took his post showed that Iran took note of opening up the world and improving the private sector. "This time I see that we can experience the benefits of our mutual agreements. I believe that this visit is a turning point economically. We have already close relations in terms of politics and we all want to relieve the pains in the region. That is why I believe this visit is a turning point."

When asked whether common ground was found during talks regarding regional issues, including Egypt and Syria, Rouhani said, "What is important to us [Turkey and Iran] is to limit the bloodshed and see the popular vote as determinative in these countries. In the past, we had common viewpoint on this issue and our foreign ministries worked on it."

Rouhani arrived in Ankara on Monday for his first official visit to Turkey. He is being accompanied by a number of Iranian cabinet ministers and high-ranking officials. Rouhani was elected president in August 2013.

In recent years, the two nations have upped cooperation in various fields including the economy, security, trade, education, energy and culture. The latest data shows that trade volume between Iran and Turkey surpassed $3 billion in the first three months of 2014. Moreover, during Erdoğan's visit the countries discussed deals to increase trade to $30 billion by the end of 2015, more than double the figure for 2013, and signed three agreements and a separate declaration. During Rouhani's visit, the two countries signed numerous agreements, including those in the fields of energy, trade, tourism and transportation.
RELATED TOPICS