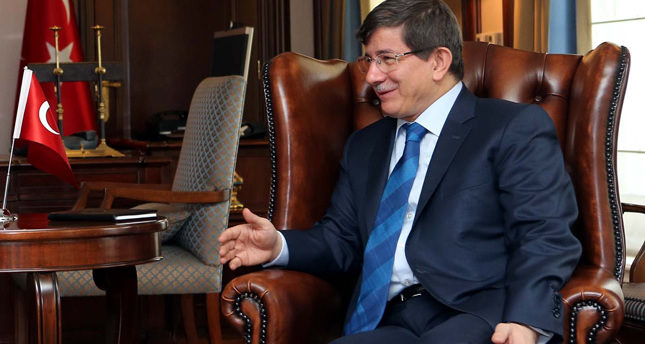 by Daily Sabah Jun 11, 2014 12:00 am
ISTANBUL — Paying a visit to Serbia's capital Belgrade, Turkish Foreign Minister Ahmet Davutoğlu said that Balkan countries should be considered family and all problems which may arise between the two countries can be dealt with through compromise. Davutoğlu held a meeting with his counterpart Serbian Foreign Minister Ivica Dacic during his visit and in a press conference that followed, Davutoğlu said that two countries' officials will work to improve bilateral relations.

This is Davutoğlu's 15th visit to Serbia after he took his post in 2009 and added that even though Turkey has no border with Serbia, he referred to the two as neighboring countries.

The foreign minister delivered his condolences to those who lost their lives in the Balkan flood that claimed dozens of lives in May and stated that Turkey and Serbia are planning to establish a joint committee for disaster response. He noted that regional issues will be discussed during his visit and Turkey is ready to cooperate with Serbia in the fields of energy, transportation, culture and tourism.

He stated that the two countries will hold an economic forum to increase trade volume to $1 billion (TL 2.08 billion) and develop economic relations. "Turkish-Serbian relations are important to ensure regional stability. That is why, we should cooperate. We will join hands with Serbia on the EU negotiation process. I would like to announce this to the whole world from Belgrade that Turkey and Serbia will cooperate for stability and peace in the Balkans." Davutoğlu said, "We [the Balkan countries] are like a family and we can solve these problems by drinking a cup of Turkish, Serbian or Balkan coffee. There are so many features embellishing our relations that every kind of rift can be solved easily. The important point is to work with a future perspective. There are common benefits of the transportation issue, including air transport. We will discuss them."

Tension between Turkey and Serbia escalated after Turkish Prime Minister Recep Tayyip Erdoğan's remarks during his Kosovo visit on Oct. 23, 2013.

Erdoğan said, "Kosovo is Turkey, and Turkey is Kosovo" by highlighting that Kosovo and Turkey shared the same history and civilization. His remarks were met with a sharp reaction by Serbia. The Serbian Foreign Ministry issued a statement saying that such statements cannot be perceived as friendly and that Turkey wandered from assurances which were made to Serbia by senior Turkish officials. In response, Davutoğlu stated in an interview on October 2013 that Erdoğan's speech was misunderstood.

A certain part was cut out from the entire speech and reflected in a way that was not pleasing to Turkey. He added that Turkey was also aiming to be on good terms with Serbia and have similar relations with all countries in the Balkans.
RELATED TOPICS