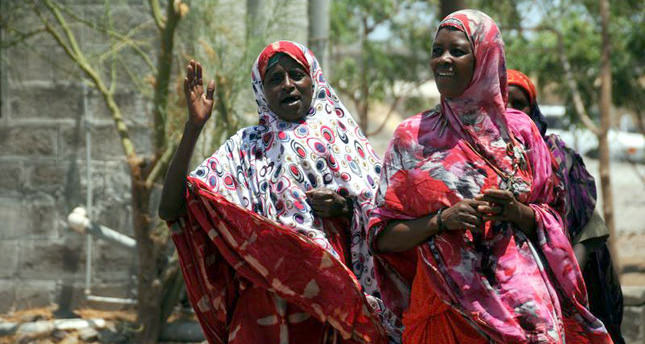 Somalis, with the help of Turkish institutions, are working to rebuild the country that was destroyed by decades of war. Infrastructure projects are transformative but have a long way to go before Somalis truly feel secure

MOGADISHU — My colleague and I took a four-day trip to Somali's capital Mogadishu to see Turkey's work in the field. Despite the security problems, we met with Turkish and Somali officials to obtain information on Turkey's facilities and services in the country.

Somalia's history dates back to the early days of Islam. Ottoman merchants introduced Islam to Somalis. Historically, the country is the only one in the world that does not include any non-Muslim community. From north to south, the people are Sunni Muslims and practice Islam according to the Shafi'ee school of faith.

The history of Somalia, one of the most prosperous countries of the African continent, changed after the colonial powers of Germany, Italy, the U.K. and France came to the region.

Prior to World War I, the colonial powers had entered into a deep struggle to control the country. Somalia's strategic position, laying near the Indian Ocean and fertile lands suitable for massive plantations, attracted the attention of colonial powers.

The dispute among them destroyed the territorial integrity of the county. While the northern territories including Djibouti were taken by France, the southern part, including the current capital Mogadishu, was colonized by Italy. The colonial period left an extremely heavy burden on the Somali society. The artificial borders drawn according to the interests of the colonial powers broke Somalis into groups in neighboring countries, including Kenya and Ethiopia. The pro-Soviet Union socialist regime, established in 1969 and collapsed in 1989, contradicted with the centuries- long traditions and Islamic customs.

Somalia, which was once upon a time one of the strongest and wealthiest countries in East Africa before the wars with Ethiopia and the civil war, has been totally destroyed. For decades there was no central government capable of controlling the country. The tribalism which is prevalent across the country has created unsolvable problems while civil war broke out among the tribes which were trying to seize power. In the last decade, as part of a global movement, allegedly the al-Qaeda linked Bayt al-Shabaab appeared to control the southern part, attempting to implement a strict religious jurisprudence system. Al-Shabaab partially gained success in controlling territories, including, for a brief period, Mogadishu.

The long wars that created the self-claimed independent territories such as the Somaliland in the northern part of the country as well as the draught and famine which has turned Somalia into a red zone area according to the U.N. have left the country without security, infrastructural services, education and economy.

Despite rich oil, gas and coal reserves, electricity is still scarce in some areas. Although the lands are fertile and the sea includes thousands of fish, the people are unable to benefit from these endowments due to war.

In 2011 when the Somalian government made a call to the international community due to the drought that killed dozens of people, Turkey acted rapidly to deliver humanitarian aid. The Turkish Red Crescent (Kızılay) and the humanitarian aid foundations including Yardımeli and Humanitarian Relief Foundation (IHH) deployed their teams to deliver desperately needed essential humanitarian aid to the Somalis.

Turkish Prime Minister Recep Tayyip Erdoğan paid a visit to the country with some members of the cabinet and his family. As part of our trip, we met with the Turkish Ambassador to Mogadishu, Kani Torun, who was appointed in 2011 and became Turkey's first Somalian ambassador. Torun said, "As Turkey our activities focus on three main areas: humanitarian aid, helping in the development of the country and making financial investments to consolidate business. We have never ceased to deliver humanitarian aid even after the U.N.'s international call was over, as the people are still in need of main nutritional goods and clean water. In terms of development, we work mainly on four areas: health, education, infrastructure and the establishment of institutional buildings."

Turkish Red Crescent officials are divided into two groups. While the first group delivers humanitarian aid across the country, the second group builds schools, roads and cleans the streets. Kızılay's Humanitarian Aid Delegation president said, "When we arrived here in 2011, we saw people dying of hunger in the streets.

We have built accommodation centers for the internally displaced people (IDP) and started the delivery of the food such as biscuits and pasta as the people needed food so urgently. In the first visit we delivered 10,000 tons of food." "After the draught and famine were over, we continued our services. We deliver food to 12,950 people and 38 orphanage centers, four hospitals and six disabled centers every day.
We make 11,600 loaves of breads every day in our mobile bakeries. In the accommodation centers we deliver food to 35,000 people. We deliver the aid to every district in the country.

Due to security problems, Somalis work for Kızılay and we pay them," he said. Noting that Kızılay's services are made by the donations of Turkish people, Ahi added that "Kızılay spent more than $30 million (TL 62 million) up to now for humanitarian aid alone. As long as Somalis need us, we will continue being here, building more hospitals, schools, wells and reach more people."

The other president of the Kızılay delegation Gökşen Yenigül said, "We have two kinds of services in Mogadishu which are waste management and producing urbanization materials.

When we arrived in Mogadishu, the city was full of rubbish as there was no municipal facility since the war went on for decades. People were living among trash. From Turkey, we have brought big machines to clean and bury the trash and turn the areas into roads. We have made barriers in some areas to prevent floats. We have cleaned 86 km-long roads and the Turkish companies made them usable. Every day we send our trucks to collect the rubbish and repair the roads if needed."

Adding that these services are made possible through the donations of the Turkish people, he noted "Kızılay has spent more than $20 million." Yenigül remarked that Kızılay trains Somali people and teaches them how to work municipal facilities both technically and administratively as they plan to leave everything to the Mogadishu municipality before going back to Turkey. Kızılay officials added that as a part of Turkey's policy towards restoring Somalia through training the Somalis, Kızılay will open a school specializing in fishing.

A Turkish NGO Yardımeli Foundation, which has been in Somalia since 2011, is building a hospital which will be the biggest gynecology and pediatrics hospital in Africa. The coordinator Mehmet Citil said, "We are building a hospital that will be totally free for the people. "Besides the ongoing hospital construction, we help 1,000 families every month."

Another Turkish NGO, IHH, has been delivering humanitarian aid to dozens of people. The NGO has established an orphanage center, hosting 350 children. Also, a farming school was established to teach students selected from villages to farm productively.

One of Turkey's official foundations, the Turkish Cooperation and Coordination Agency (TİKA) has been serving in the country since 2008. TİKA's Somalia branch Chairman Abdulahad Kökdağı said, "Turkey, before the humanitarian crisis, decided to renovate the Ottoman buildings, as Somalia has become part of the empire for many years. After the humanitarian crisis broke out, we decided to establish an office here to carry out services such as building hospitals, delivering computers to schools and organizing courses to train professions to the Somalis."

The delivery of humanitarian aid which started in 2011 and still continues. Turkish officials said that the Turkish government, especially Prime Minister Erdoğan himself, closely follow the improvements and the services offered by Turkey. It is also noted that Somali people are very happy to see the Turkish presence in the country. The Turkish institutions, despite small-scaled problems, have been working in cooperation to bear more fruitful results for restoring the country. Every institution noted that their works are not bounded with the capital but cover every area in the country.
Last Update: Jun 11, 2014 10:40 am
RELATED TOPICS