Ankara on alert as ISIL kidnaps Turkish diplomats in Mosul 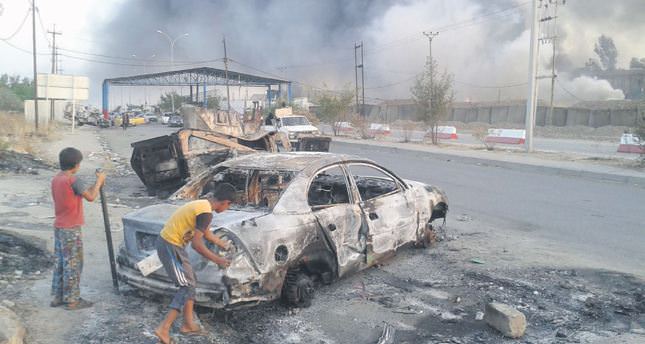 ISIL militants raided Turkey's consulate in Mosul and kidnapped diplomats yesterday. Top officials in Ankara convened to determine how to tackle the threat posed by the terrorist group

The Turkish consulate in the northern Iraqi city of Mosul was stormed Wednesday by Islamic militants, who took hostage 49 people including Consul General Öztürk Yılmaz, three children and 16 diplomats. The attack came as Iraqi Prime Minister Nouri al-Maliki declared a state of emergency after the Islamic State of Iraq and the Levant (ISIL) overran Iraq's second largest city, overpowering Iraqi central government forces on Tuesday and causing tens of thousands of civilians to flee. The militants are continuing the offensive, reportedly taking control of Tikrit,140 kilometers from Baghdad, and moving towards Kirkuk and Tuz Khurmato. In response to events, Turkish Prime Minister Recep Tayyip Erdoğan held an emergency meeting in Ankara, including participation by the Undersecretary of the National Intelligence Organization Hakan Fidan and Lieutenant General Erdal Öztürk, chief of staff for operations.

Meanwhile, 28 Turkish truck drivers have been abducted since ISIL took control of Mosul on Tuesday, prompting the Turkish government to take action to secure their release.

"We are currently in a busy traffic of exchange [with authorities] to ensure the rescue of the drivers as soon as possible. There has been a continuous exchange between Ankara, Irbil, Baghdad, Tehran, Washington and Mosul in the last 24 hours," Davutoğlu told Anadolu Agency (AA) yesterday during his official visit to the Serbian capital of Belgrade.

The melting away of Iraqi government forces has caused concern the militants could continue their offensive, prompting calls for unity and cooperation in Iraq and with regional countries.

Speaking at the EU-Arab League meeting, Iraqi Foreign Minister Hoshyar Zebari called for urgent cooperation with the Kurdish Regional Government (KRG) in order to deal with the threat facing Iraq.

Local media reported Kurdish peshmerga forces were deployed to Tuz Khurmato, an ethnically mixed city in Saladin province with a sizeable ethnic Turkmen population, to defend the town against an ISIL takeover.

Initial reports indicate Kurdish peshmerga and the Iraqi army could perform joint operation to retake Mosul. Bayram Sinkaya, a Turkish academic specializing in the Middle East, told AA, saying that Kurdish forces entering the fight "could mean enlarging the base of Kurdish forces in Iraq and would strengthen their position in the disputed regions."

Speaking at a press conference, the governor of Iraq's Nineveh Province, Ethyl Najafi, said popular committees would be formed in Mosul to fight the insurgents. "We will only kick them out of Mosul. What happened in Nineveh is a collapse of the Maliki government," he said, adding that he opposes declaring a national emergency because it could complicate the current situation.

Mehmet Seyfettin Erol, an associate professor at Gazi University and the head of Center for International Strategy and Security Studies (USGAM), told Daily Sabah that northern Iraq has increasingly become a target for the ISIL. "ISIL's moving towards north of the country has been seen a deteriorating factor for Turkey's objectives in the region," Erol said. As Mosul and Kirkuk have become the main targets of the ISIL, Erol said that Turkey should be "in cooperation with local and regional dynamics across the region" in order to take responsibility for maintaining security of Turkmens and Iraqi Kurds.

ISIL is a terrorist group active in Iraq and Syria that aims to establish an Islamic state.

The group has been acting independently after al- Qaeda cut off all ties to ISIL in February 2014. It is claimed that the group has a strained relationship with other rebel groups fighting the al-Assad regime in Syria.

The Turkish Consulate in Mosul has been exposed to five serious attacks within two years. Most recently a bombing attack to the Turkish motorcade has been carried out by the militant group on May 24.
Last Update: Jun 12, 2014 1:58 am
RELATED TOPICS