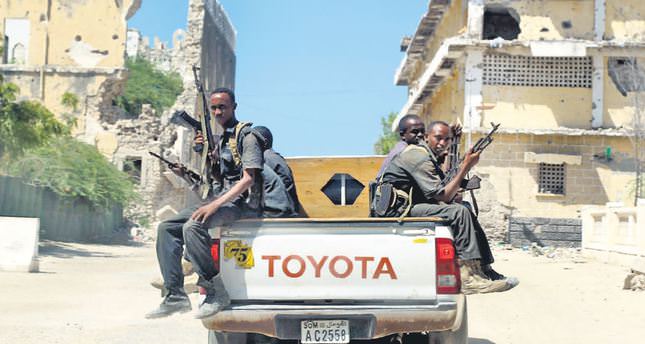 Although Turkey went to Somalia to provide humanitarian aid in 2011, Mogadishu has been offering more political power. If accurate steps are taken, a stronger Turkey in a stronger Somalia may be visible

The 16th century was the first time Turks entered Somali territory when local governors asked Sultan Süleyman the Magnificent to rescue Mogadishu from the Portuguese navy, which was looting the city. Although the Ottomans lost to the Portuguese navy, they left behind mosques and a castle. After three centuries, the Ottomans were in Somalia again to help the local people who were resisting a British invasion and suffering from a humanitarian crisis. The Ottomans established an embassy, dug water wells and trained people to create an army.

Although the Somalis claimed victory over British troops, the collapse of the Ottoman Empire ended the resistance. Many years later, Turks again went to Somalia. This time it was to provide humanitarian aid when the Somali government made an international call for help to deal with drought and famine. Turkey, which had become one of the most rapidly growing economies in the world, replied to this call in a positive way. After the two peoples remembered each other, Turkey decided to take a permanent position in the country, which has vast resources and located very strategically. As the other parts of Africa were in the hands of others, including Europeans and China, Somali was the country that welcomed Turks only.

After successfully launching humanitarian aid by delivering food, digging wells, building hospitals and schools and carrying out infrastructural services, Turkey's Somalia policy moved beyond humanitarian aid. For Turkey, it was quite new to establish a crucial and decisive position in a country's politics. Although Turkey launched a new policy, called "zero problems with neighbors," after Ahmet Davutoğlu was appointed foreign minister, the rapidly changing situation in countries, especially in the Arab world, has made the policy impracticable.

The civil war in Syria, the collapsed state in Iraq, the military coup in Egypt and breaking relations with Israel over the Mavi Marmara issue forced Turkey to change its plans. Yet, in Somalia every group except the al-Qaedalinked Bayt al-Shabaab, welcomed Turkey.

Turkish Ambassador to Somalia, Kani Torun, told Daily Sabah: "We want to be permanent here not as a colonial power but as the brother of these people. We base our relations on mutual benefit. Our aim is not to exploit the resources of this country." Noting that Turkey has started training the top officials of the Somali army in Turkey's capital, Ankara, Torun added: "The biggest problem of this country is security. A well-trained army is crucial to improve the future of this country."

Somalia is rich in natural resources such as oil, natural gas, coal and uranium. Some U.S. companies want to dig for oil, while a Norwegian company will start extracting natural gas from the sea in the upcoming months, according to a Somali official.

Although Turkey spends a huge amount of money on the country - hundreds of millions of dollars per year - Ambassador Torun said: "There is no Turkish company that is capable of establishing a facility to extract oil, natural gas or uranium. Turkey's aims seem ambiguous, as the most beneficial resources of the country will not be used by Turkey. Turkish personnel, living in Mogadishu and carrying out services offered by Turkish institutions, including the Turkish Cooperation and Coordination Agency (TİKA) and the Turkish Red Crescent, were disappointed with Turkey's inability to benefit from these resources and asked what would be the outcome of Turkey's investments. The personnel, working under very tough conditions, especially in terms of security, were happy to deliver humanitarian aid but were wondering about the reasons behind Turkey's intervention in Somalia's internal politics, as Turkey supports the central Somali government.

Turkey's policy is to support the central government and the territorial integrity of the country. Somalia has been divided into 13 federal states, and Somaliland in the north has declared independence. Turkey has very good relations with every state, the ambassador said. Turkish Red Crescent official Yiğit Kansu Yılmaz said: "As Turkish institutions, we have no problem with any state including Somaliland. As a humanitarian aid institution, we are able to deliver aid everywhere except in southern districts that are controlled by al-Shabaab."

The chairman of the Somalia branch of the Turkish Cooperation and Coordination Agency (TİKA), Abdulahad Kökdağı, said: "Somalia is unique for Turkey. We have not had such an experience before. I believe we have gained a big success in a short time, and the most important thing is that Somalis really love Turkey. Yet, the lack of research on the ground before making projects harms Turkey. In Somalia, internal balances are very sensitive and fragile. Some Turkish institutions consciously or unconsciously have taken a side in the internal conflict through giving priority to some tribes in commercial issues." When asked about the role of other countries, especially the United Kingdom, which wants to erase traces of Turkey according to the claims of some sources, Kökdağı stated, "Before efforts by the UK or any other country, Turkey may lose suitable ground to strengthen its presence here due to incorrect decisions made in strategic moments."

Besides the conflict among the tribes, neighboring countries, Ethiopia and Kenya, oppose a stable Somalia, according to a Somali official. The same source also added that the UK and other European countries are powerful in the two countries and benefitting from their resources. According to the source, that is why Turkey, which is the only country that is able to provide security and stability in Somalia through investments and bettering living conditions, is not wanted.

Yet, no official statement has so far been made by any country about the Turkish presence in the country. Allegations also cover the possibility that al-Shabaab is supported by Gulf countries - except for Qatar - to stop Turkey. Another Somali source told the Daily Sabah that Gulf countries spend more money on Somalia than Turkey; however, they have been unable to achieve the same result and acquire the same level of influence. The source said people from the government to ordinary citizens believe that Arabs are here not to help but to secure their prosperity. He added: "Somalia has huge oil reserves. If Somalia becomes stable and the oil is extracted, the Gulf 's monopoly will be broken." Al-Shabaab, whose members follow the strict Wahhabi-Salafi School, has an ideological common point with Gulf Arabs. Yet, the Turkish ambassador said it is impossible to prove these allegations.

On the al-Shabaab issue, Abdullah Abu Bakr Al Hajj, the chairman the Manhal Charity Organization, a Somali Mogadishubased humanitarian aid institution, said the group uses religion to justify their attacks. He claimed that they are harming Islam and sabotaging a brighter future for Somalia. Mehmet Çitil, the coordinator of Turkish NGO Yardımeli Somalia Branch, which builds hospitals and delivers aid, said: "It is undeniable that al-Shabaab has a base in these lands, as the group provides security that cannot be offered by the central government.

People are tired of the decades-long war and looking forward to seeing a strong power in the country. Yet, al-Shabaab does not allow anyone who disagrees with them to survive."

Contrary to Çitil's words, Omar Cami, the deputy director of the Zamzam Foundation, which carries out humanitarian services across the country, said: "Al-Shabaab has no legitimacy and loyalty in Somalia. They force people to obey them." He underlined that Somalis' understanding of Islam is moderate, but al-Shabaab imposes a strict one that people refuse or forcibly accept. On Turkey's position in the country, Camii added: "Investment by Turkey will stabilize the country and create more job opportunities. This is the solution as to how Somalis will get rid of al-Shabaab. Turkey's economic aid is crucial."

A Mogadishu-based think tank, the Heritage Institute, whose members mostly have lived in diaspora, offered its thanks to Turkey for the ongoing projects. The executive director of the institute, Abdi Aynte, said: "Turkey is the best ally of Somalia. When Erdoğan came here in 2011 he behaved as an ordinary citizen. It was the day Somalis were convinced that Turkey did not have any hidden agenda." When asked about Turkey's relationship to Somali domestic politics, he added: "We cannot see Turkey as a colonial power at all. Turkey has to secure its investments."

On al-Shabaab he noted: "The group has lost power in many areas and does not have sufficient resources to survive. Yet, they terrorize society as they gradually lose."

Based on my observations in Somalia, it can be said that Turkey wants to stay in the country and increase the budget allocated for investments. Besides the enhancement of the economic and commercial budget, Turkey wants to be involved in the politics of the country and not just to act like a construction company. Yet, Turkey needs to be very careful when taking steps, as Somali politics both internally and regionally are more complicated than Turkey thought before 2011.

Not only al-Shabaab, but also the tribes play a very crucial role in the country. The bloody history of the country may drag Turkey into bigger problems that also concern neighboring countries. Yet potentially, Turkey has the opportunity to achieve great success in this
country, if decisions are made accurately.
RELATED TOPICS