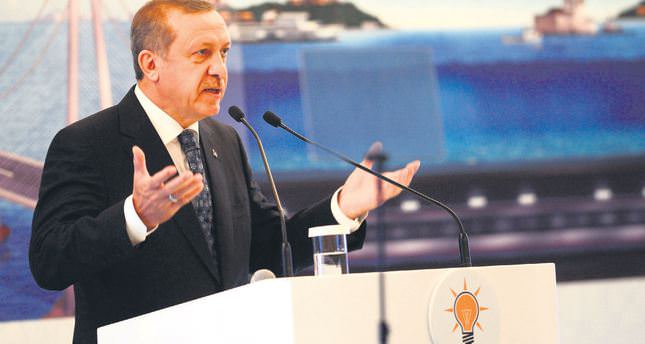 PM says he spoke with the kidnapped diplomat and that Turkey is following the process closely. Turkish army has launched a military maneuver

Addressing a crowd in Rize on Friday, Prime Minister Recep Tayyip Erdoğan indicated he spoke with the consul general of Mosul on the phone and noted the government is trying its best to evacuate all Turkish citizens in Mosul, including 49 citizens abducted from the consulate, truck drivers, as well as those who work at factories here. "We are closely watching the process," said Erdoğan, who added he himself along with the Ministry of Foreign Affairs, the National Intelligence Organization (MİT) and the Turkish Armed Forces are striving to bring back the Turkish citizens in a safe and secure manner, while noting that he spoke with the consul general of Mosul, indicating that everyone is safe and healthy.

The prime minister reiterated the government's statement that there are no other consulates in Mosul, except the Turkish General Consulate and added, "We [the Turkish government] have been in contact with the Iraqi government and our envoy in Baghdad also follows the issue closely."

He said that Turkey has ensured the required legal infrastructure is in place by contacting international organizations, including the U.N. and NATO, not only in the case of abducted consulate personnel but also for 31 other Turkish citizens taken in Mosul. The prime minister noted that necessary action will be taken by Turkey to ensure the security of abducted Turkish citizens in Mosul.

As Turkey continues to negotiate with the Islamic State of Iraq and the Levant (ISIL) for the release of Turkish hostages abducted at the Turkish Consulate in Mosul on Wednesday, authorities are also evaluating the military intervention option. Recently, the Anadolu Kartalı Training Center, Turkey's largest aircraft training center, conducted a drill with the participation of 90 airplanes from five countries including NATO's early warning planes, which many claimed resembled a military drill for a potential attack against Mosul.

A portion of the drill conducted at Konya Third Main Jet Base Command was open to the press, and England, Spain, Qatar and Jordan were amongst the participants along with Turkey's newest early warning plane called Barış Kartalı (Eagle of Peace), its first participation in an international drill. On the other hand, it was Qatar's first time participating in the event, while Australia, Azerbaijan, Bahrain, Bosnia and Herzegovina, Algeria, Finland, Georgia, South Korea, Kuwait, Macedonia, Romania, Chile and Greece participated as observers who were given a briefing about the event.

The drill was conducted over a large area, as the Turkish Air Forces tried to improve the simultaneity of its operations with NATO forces. Here, airplanes tried to surpass one another, and NATO's early warning planes along with Turkish planes tried to practice a potential operation against Mosul. Moreover, it was stated that the Anadolu Kartalı Training Center, the third largest of its kind worldwide, tries to train pilots without experience on how to stay alive at the time of an attack or war and cooperates with NATO countries to be able to conduct simultaneous operations with other countries.
Last Update: Jun 14, 2014 1:07 am
RELATED TOPICS