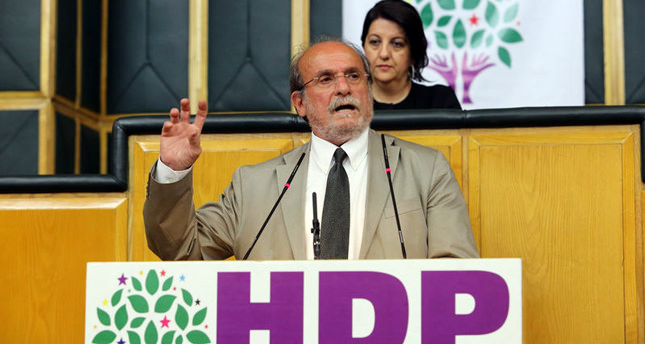 HDP co-chair Sebahat Tuncel said that the HDP's candidate will be finalized on June 22 and added that the party hopes to garner the votes of the main opposition Republican People's Party (CHP), which announced a joint candidate, Eklemeddin İhsanoğlu, with the Nationalist Movement Party (MHP).

Speaking on joint candidate İhsanoğlu, Tuncel said, "considering İhsanoğlu, it can be said that the [CHP and MHP's] aim is to garner the votes of conservatives and nationalists."

"After the March 30 local elections, the CHP is aiming to receive the votes of conservatives and left-wing parties from us [HDP] with this move."

When asked what kind of action the HDP would take if PKK leader Abdullah Öcalan, who is imprisoned on İmrali island, were to ask Kurdish people to vote for the AK Party's possible candidate Turkish Prime Minister Recep Tayyip Erdoğan, Tuncel said, "We [HDP] have had principles since the beginning. When we held talks with CHP leader Kılıçdaroğlu [on a joint candidate], we expressed our principles. We will not agree on a joint candidate neither with the MHP nor the ruling party [AK Party]. We express to the nation that the HDP is not without alternative."