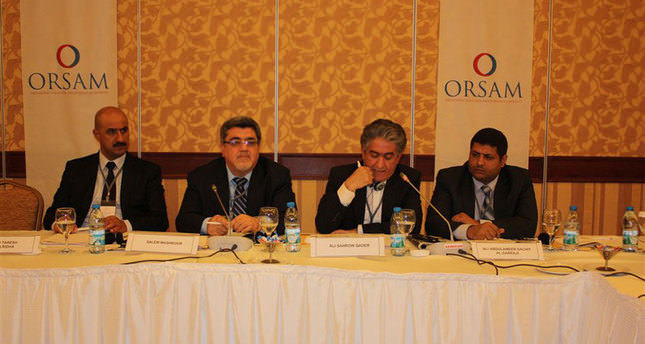 by Ali Ünal Jun 17, 2014 12:00 am
Recent developments in Iraq and the 2014 election results were discussed in Ankara on June 13 at a workshop organized by Ankara based think-tank, Center for Middle Eastern Strategic Studies (ORSAM). The event "The Future of Iraqi Politics After the 2014 Elections," was held with the participation of Sunni, Shia, Kurd and Turkmen academics and research institute experts from Iraq that represented the multicultural nature of the country.

In the first session of the event, the 2014 Iraqi election results and the outcomes were exhaustively discussed. According to Salem Maskhour from Iraq's Communication and Media Commission, Iraq is facing a very complex situation, and any drastic changes in Iraq not only affect Iraq but also countries in the region, especially neighboring countries. "These events not only threaten Iraqi politics and security, but at the same time threaten the region. In this respect, countries in the region, international actors and organizations must take the responsibility of ending this threat," Maskhour said.

Firas Cokrkis of Baghdad University said that there are three governmental alternatives for Iraq. They are a national harmony government, a majority government and a national independence group. Cokrkis believes that all political formations should come together to form a government. On the other hand, Mahir Nakip from Çankaya University asserted that there is no democracy in Iraq and that when democracy has failed in a country, a division occurs. "The Turkmen have really serious problems, and the Turkmen are excluded from the Iraqi equation," Nakip added.

In the second session of the event, Serdar Aziz from Cork University said the Kurdistan Democratic Party and the Patriotic Union of Kurdistan gained votes in the regional election, but in the national election the situation was not the same. Aziz added that Goran gained many more votes in the national election. Researcher Ali Sahrow drew attention to another point, saying that all groups in Iraq have difficulties."The central government ressures all of its people; thus, decreasing trust between the people and the government. Maliki destroys all good things in his country," Sahrow added. However, Assad Abdulridha from Baghdad University said that Maliki is working in a hostile and hard environment. Osman Ali from Salahaddin University said, "I want Turkey to help Iraq form the future government." Ali asserted that to form a stable government Turkmen, Kurds, Arabs, Sunni and Shia must be in his new government, adding, "A stable Iraqi government is also good for Turkey. In the election, Turkey treated all parts equally; thus, I would like to thank Turkey."