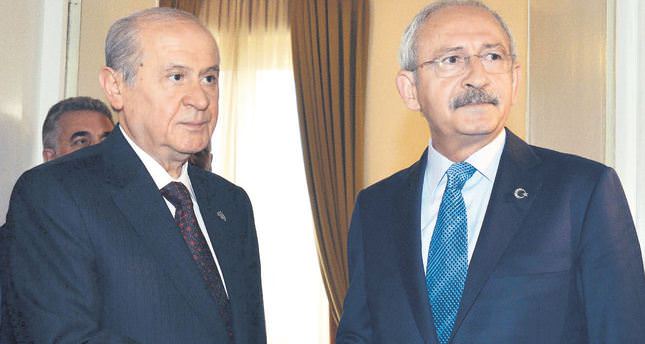 The opposition announcement of former Secretary-General of Organization of Islamic Cooperation (OIC) Ekmeleddin İhsanoğlu as the joint presidential candidate has sparked confusion in Turkish politics.

The coalition of the Republican People's Party (CHP) and the Nationalist Movement Party (MHP) plumped for İhsanoğlu, a politician with a strong Islamic background, goes against the secular foundations of both parties.

Turkish Prime Minister Recep Tayyip Erdoğan, who is likely the presidential candidate of the AK Party, yesterday did not speak on the opposition parties' candidate at a party group meeting, but responded to journalists' questions on İhsanoğlu's candidacy, saying that the nation is the decision maker on who will be the president. Erdoğan noted that the AK Party will announce its candidate at the end of June.

In regards to Monday's joint candidacy announcement, Turkish President Abdullah Gül yesterday said that it is completely normal to see numerous candidates in a presidential race as a result of pluralistic democracy, but added that as the president of the country he needs to have a supra-political stance, even though he is one of the founders of the ruling AK Party.

On Monday, weeks-long negotiation between Turkey's main opposition parties MHP and CHP yielded a presidential candidate, who is a little known by name to the majority of the Turkish electorate. The secular CHP is accused of diverging from its principles and ideologies by announcing İhsanoğlu, who is known for his Islamic background.

CHP leader Kemal Kılıçdaroğlu, at his party's group meeting, stated that the president- to-be will not belong to the CHP, but to the entire nation, that is why the president who focuses on a political party cannot be independent. He echoed his sentiments that the president who is known for his political identity cannot be an effective president. "There is no conflict, but peace in our [CHP] politics. We side with brotherhood and peace. There will be no future for a society that is worried. Democracy needs compromise and when we compromise, we will enhance the quality of democracy."

Kılıçdaroğlu also accused Turkish presidents who had strong political identities of having only the duty of approval and added that Turkey needs a president who takes their strength from the nation and constitution.

Regarding İhsanoğlu's candidacy, Kılıçdaroğlu said, "There was more than one option, but we [the CHP and MHP] agreed on one candidate: His name is Ekmeleddin İhsanoğlu. Turkey does not know him [İhsanoğlu] enough, but he is well-known around the world."
Kılıçdaroğlu said that İhsanoğlu wants to embrace the Turkish nation as the president and he has no statement that can offend even one part of the society.

MHP leader Devlet Bahçeli said yesterday that his party has been in contact with certain actors in politics and society since May 16, and these consultations and contacts bore fruit yesterday. He said, "The CHP's candidate offer [Ekmeleddin İhsanoğlu] pleased us [MHP].
The MHP adopted this offer and found it suitable."

Bahçeli stated that İhsanoğlu was successful in his post at the OIC for 10 years and had no organic contact with politics.

İhsanoğlu is a Turkish academic, diplomat and former Secretary-General of OIC. Born in Egypt in 1943, İhsanoğlu has worked on science history, Turkish culture, Islamic world and Western relations, Turk-Arab relations. His family went to Egypt as a reaction to Mustafa Kemal Atatürk's attempts to transform and secularize the Turkish society through abolishing the traditional Islamic institutions.

During his duty at OIC, he was harshly criticized by several groups and the government for his silence against the military coup in Egypt held on July 3 and against the war crimes committed by the Assad regime in Syria.

For more than one month, CHP and MHP leaders held talks with each other as well as certain political figures and civil society to decide what kind of a joint candidate should be nominated, preferring a president that was more inclusive.
RELATED TOPICS