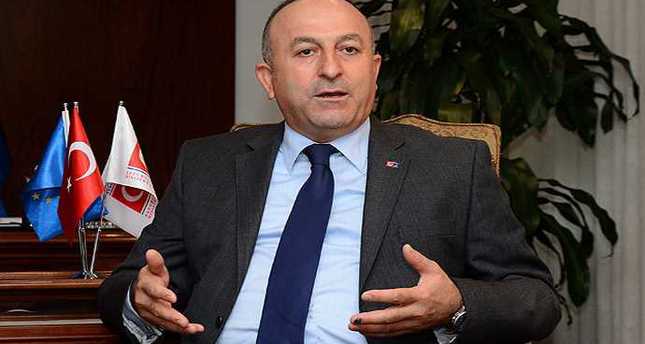 by Ali Ünal Jun 18, 2014 12:00 am
"In the face of positive developments in Turkey, we expect the EU to approach us, similar to other candidate countries, objectively and fairly. We also desire that the negotiation process be tied to a concrete timeline," EU Minister Mevlüt Çavuşoğlu said yesterday in Ankara, during his address at the meeting of the working group on the Chapter 23 (Judiciary and Fundamental Rights), in which the EU Commissioner for Enlargement Štefan Füle and Minister of Justice Bekir Bozdağ participated. EU Enlargement Commissioner Štefan Füle paid a two-day visit to Turkey to discuss recent developments in the country, EU-Turkey relations and the future of the accession process. During his visit he met with President Abullah Gül, President of the Constitutional Court Haşim Kılıç, Minister of Foreign Affairs Ahmet Davutoğlu and Economy Minister Nihat Zeybekçi, all of whom attended the Chapter 23 working group meeting. He also met with representatives of civil society and NGOs to discuss the state of accession talks and the process of democratization in Turkey.

During his address, Commissioner Füle praised the importance of the working group on the Chapter 23 and said that this meeting is a fundamental element in our joint efforts to address issues relevant for the progress in the accession process.

Füle further added, "I have already witnessed a number of courageous and positive reforms implemented by Turkey. Let's not undermine these efforts. We have invested a lot, time, energy and also financial resources. We need to reaccelerate the process, starting hopefully from this meeting."

During the nine years of negotiations, the number of chapters that have been opened for negotiation has increased to 14 with the opening of Chapter 22 on Nov. 5, 2013. Sixteen of the remaining 19 are currently blocked due to political obstacles posed by the Council of the European Union and EU member states like Greek Cyprus and France. However, these two chapters are essential in negotiations currently being vetoed by Greek Cyprus despite the judiciary. The two chapters are both areas the Turkish government has long been criticized for and it has been urged by the EU to resolve judicial problems and to continue reforms in this field.

Çavuşoğlu said that Turkey fulfilled opening criteria for chapter 23 in 2006 and drew attention that the EU failed to open the accession of these two chapters over the past eight years. Çavuşoğlu also said that despite the political obstacles Turkey continued strategic interest in EU membership, "in case of the disappearance of stonewalling Turkey is eligible to negotiating chapter 23. This is the reality of Turkey's EU accession process," he added.
RELATED TOPICS