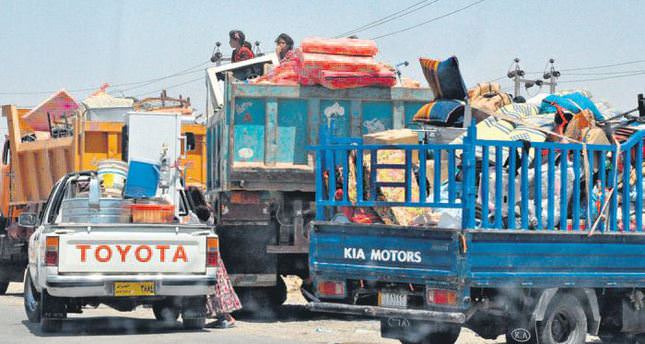 A haven as the rest of Iraq dissolves into chaos, the Kurdistan Regional Government (KRG) has been governed by its own parliament and government for more than a decade, mostly sheltered from the violence that descended on the country after the 2003 U.S. invasion.
While rejecting separation from Iraq in their comments to Daily Sabah, top KRG officials argue that any move toward independence must involve the consent of the people. Meanwhile, the KRG's place in a federated Iraq has become more awkward over the past few years as Baghdad and the Kurdish government failed to agree on a way to share the proceeds from oil exports.

As the Maliki government's sectarian policies alienate Kurds and Sunnis, the KRG, due to its burgeoning ties with Turkey, has strengthened its commercial ties with Turkey and built a pipeline for direct oil exports. Over the weekend, Israel set itself to be the first country to purchase oil directly from the KRG. Coupled with ruling AK Party spokesman Hüseyin Çelik's statement that Iraqi Kurds would have the final say concerning the future of their land, in contrast to Turkey's furious opposition to any such move, recent developments show the KRG has decided to seek financial independence but will play the waiting game for the real thing.

The idea of declaring an independent Kurdistan amid the ongoing conflict in Iraq has been gaining more traction in recent days. However, KRG officials seem to be cautious about making such a move.

Hüseyin Çelik, a spokesman for the ruling AK Party told Kurdish media outlet Rudaw recently that Kurds in Iraq have the right to decide the future of their land. "The Kurds of Iraq can decide for themselves the name and type of entity they are living in. The Kurds, like any other nation, will have the right to decide their fate," Çelik told Rudaw in an interview. The spokesperson added that Turkey has been supporting the Kurdish Regional Government (KRG) and will continue to do so.

Çelik's comments were echoed in Washington, D.C. as Turkey's move to welcome an independent Kurdistan on its border was applauded by some senators. U.S. Senate Majority Leader Harry Reid said that whether the Kurds break away from Iraq and form their own country is a decision that will ultimately have to be made by actors in the region. "I think it's great that Turkey put their imprimatur over this. It's good they did that, gave it their blessing, but the ultimate division of their country, if in fact there is one, has to come from Iraqis," Reid said in an interview with the Huffington Post.

However, KRG officials have maintained their cautious attitude. Answering questions about declaring independence amid the ongoing conflict, KRG spokesman Safeen Dizayee exclusively told Daily Sabah that any change in administrative status would need to be parliament's decision or carried out pursuant to a referendum. "The Kurdistan parliament is the body responsible for making administrative decisions on behalf of the people of the Kurdistan Region. Thus far the parliament has decided to work within the parameters of the federal Iraqi state. Any change in administrative status would need to be achieved through decisions by the Kurdistan parliament or a referendum by the citizens of the region," Safeen Dizayee told Daily Sabah.

The U.S has been opposed to the idea of an independent Kurdistan due to the strong opposition of Turkey. However, during the AK Party era, Ankara and Irbil have built strong economic and diplomatic relations.

Turkey's policy changes toward the KRG may affect U.S policy in Iraq and some hope an independent Kurdistan would have the potential to promote stability in the region with the support of Washington and Ankara.
RELATED TOPICS