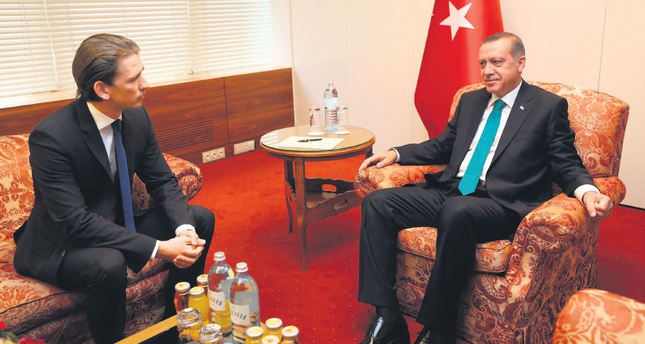 DespIte critical statements made before Prime Minister Erdoğan's visit to Austria and France, European leaders have changed their tone due to Erdoğan's constructive stance and agreed to push Turkey's stalled EU membership process forward.

Prime Minister Recep Tayyip Erdoğan on Friday accepted Sebastian Kurz, Austria's Foreign Affairs Minister, under the scope of his contacts in Vienna during a visit to attend the 10th anniversary of the Union of European Turkish Democrats (UETD) and to promote the AK Party's candidate in the upcoming presidential elections.

While Kurz has previously made controversial statements about Erdoğan's arrival in Austria, and did not make any statements following the meeting, Mevlüt Çavuşoğlu, who is Turkey's Minister of European Union and the Chief Negotiator, has expressed that the meeting was extremely constructive with "positive messages."

Çavuşoğlu said that both sides agreed to open up further chapters in the EU process and to improve bilateral relations. He explained Kurz responded positively to Erdoğan's remarks and went on to say that the prime minister took special care to ensure that the statements made to the public are consistent with those that are withheld from the press. Touching upon the fact that Kurz has emphasized the importance of learning the German language for Turkish immigrants in Austria, Çavuşoğlu reported there were still shortcomings. On the other hand, Kurz was self-critical when he noted radical parties in Austria were another reason for issues in integration as they discriminated against Turkish people. Likewise, Prime Minister Erdoğan is reported to have requested a more active role by Austria in Turkey's accession to the EU while he also underlined increasing the volume of trade between the two countries. In response to the abduction of Turkish citizens in Iraq, Kurz has expressed his concern and worry and stated he felt the pain shared by families of the hostages.

Prior to his visit to France, Erdoğan spoke with Paris Match magazine and made remarkable statements about Turkey's membership in the EU. Erdoğan expressed that Turkey is in favor of a nuclear-weapons-free Middle East without any exceptions while noting that they do not oppose the use of nuclear energy for peaceful purposes and stated it was a "natural right for every country."

Erdoğan stated Turkey adopts many values shared by the EU including the rule of law, understanding of human rights and democracy. On the other hand, Erdoğan stated while the block on opening various chapters in the EU negotiation process upset Turkey, it does not discourage them from their objective to become a member. Commenting about relations between Turkey and France, Erdoğan expressed a new page is being opened with France's new president Francois Hollande.

Prime Minister Recep Tayyip Erdoğan's next stops are Lyon and Paris where he will be addressing Turkish citizens there. Erdoğan has met with French President François Hollande in Paris on Friday where they discussed Turkey's membership process in the European Union as well as recent developments in Turkey's neighboring countries.

France's attitude towards Turkey's acceptance in the E.U. was one of the highlights of the meeting as the country has previously had an opposing approach, but Erdoğan has expressed Hollande's leadership has brought more conciliatory attitudes and support from France. It was stated that Hollande, in his visit to Turkey four months ago, signaled France would remove the vetoes blocking the opening of new chapters where Erdoğan had requested the opening of Chapter 23 as a step to express their positive intentions.

Another issue that was tackled at the meeting regarded increasing racism in Europe, which was especially prominent during the E.U. Parliament elections. Erdoğan expressed his concern and stated the membership of Turkey in the E.U. would be a crucial step to dealing with racism in Europe and would contribute to harmonious living and toleration.

On the other hand, the two leaders also touched upon the escalating violence in Iraq perpetrated by the Islamic State of Iraq and al-Sham (ISIS) while emphasizing the idea that the territorial integrity of Iraq was important for both countries. An agreement was reached expressing a common stance towards radical and extremist groups in the region while Hollande condemned the raiding of the Turkish Consulate in Mosul. Likewise, the crisis in Syria was also discussed and it was expressed that the situation worsened every day as Bashar al-Asad continued to slaughter people despite the elections.

The two leaders have also agreed to increase economic cooperation between the two countries and sent positive messages about their cooperation on regional problems.

A 2012 amendment in Turkish law allows Turks living abroad to cast ballots for the first time in national elections. Thanks to the change, 2.7 million Turkish citizens have become eligible to vote at 2,392 polling stations in 54 countries. The highest numbers of Turkish voters abroad are located in Europe.

The number of Turkish voters in Germany alone is equivalent to the population of Turkey's fifth largest city Adana and the total voting
population abroad will correspond to around 5.5 percent of the total electorate. It's a significant number that stands as a game changer. Erdoğan's meeting in Germany has received significant support from Turkish citizens while numerous Alevi organizations have protested the event but the German government has explicitly stated that Erdoğan was welcome to have his meeting with Turkish people in Germany.
RELATED TOPICS